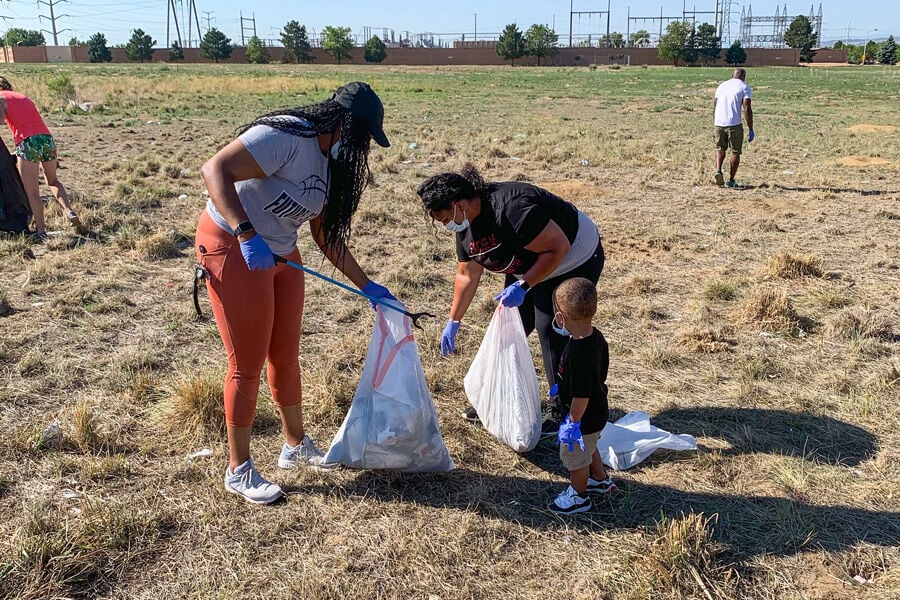 Latrina Ollie and Sharise George organized a cleanup near the Kelker Substation. 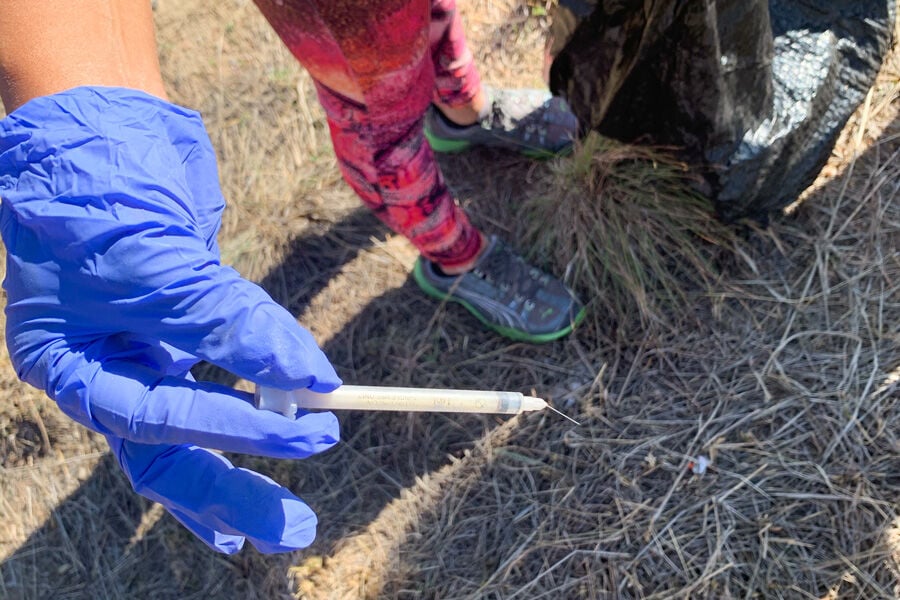 A hypodermic needle found near the Kelker Substation 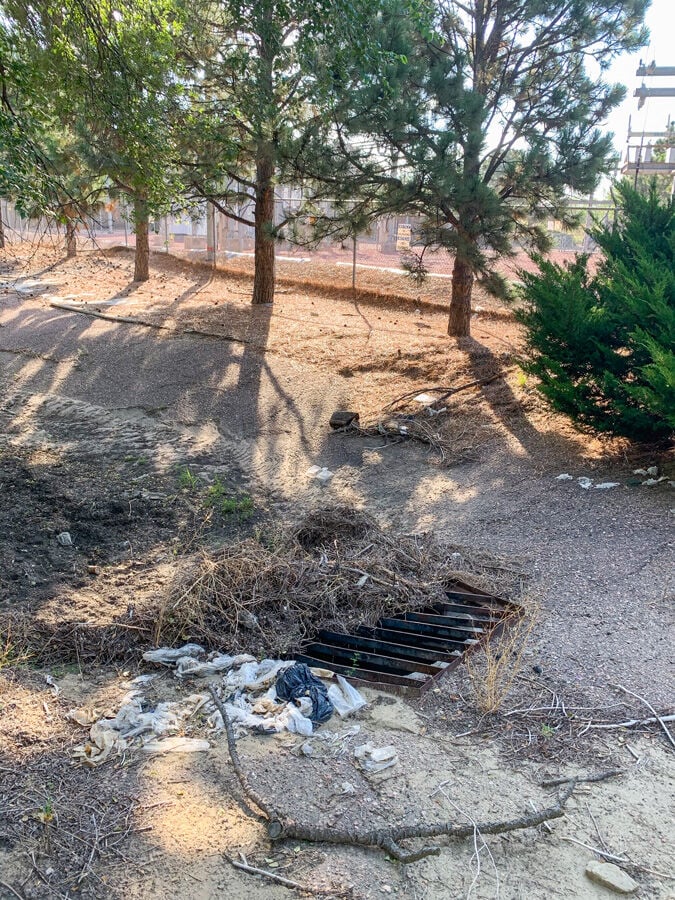 Trash at the Hancock Substation

According to the most recent El Paso County “Community Needs Assessment,” released by the Department of Human Services and El Paso County Public Health, the retail vacancy rate in Southeast Colorado Springs is 17 percent, compared to 7 percent overall in Colorado Springs. Additionally, not only does Southeast Colorado Springs have “the highest percentage of minority households,” but it is also the recipient of “years of disinvestment, historic biases, poor transportation links and limited representation in the civic process.”

Residents of Southeast Colorado Springs are starting to take personal responsibility for their neighborhoods, despite money and resources allocated by the city to handle these issues. The city contracts much of its litter mitigation to a local nonprofit, but as a private entity it does not have the kind of oversight or financial transparency that a city department providing services to taxpayers would.

Latrina Ollie, one of the organizers behind Be the Change 719, was out helping community members pick up trash in a vacant field on South Academy Boulevard, in between a McDonald’s and the Kelker Electric Substation, last summer. The field was full of litter, discarded tires and broken furniture, and used hypodermic needles. “We wanted to give the city a better image of the Southeast side and Black Lives Matter,” she says. “We just wanted to come up with our way of doing something that we felt was safe, but also bringing attention to the Southeast side, since a lot of people say there’s a lot of crime down in this area.”

Ollie and co-organizer Sharise George partnered with the Council of Neighbors and Organizations on the cleanup. CONO provided a dumpster, but Keyshon Cooks, the Southeast community coordinator, credits Ollie and George for much of the work. “I just supplied the dumpster and I came out to help because I’ve lived in Southeast for 23 years of my life, so I just felt like it was my duty to come out and help,” he says. “It really helps to have people like Latrina and Sharise setting these things up, so people take initiative in the community, and it’s not just all on the city. No one’s going to protect Southeast except Southeast.”

No one’s going to protect Southeast except Southeast.

The vacant lot Be the Change 719 cleaned up that day was land owned by Colorado Springs Utilities (CSU), which is also responsible for its maintenance. Just a few miles west of the Kelker Substation, the Hancock Substation was in a similar condition. Bags of trash, a discarded shopping cart and broken glass were scattered all over the property.

CSU has a contract for litter mitigation with a local 501(c)3 nonprofit. “We have a partnership with a nonprofit organization called Keep Colorado Springs Beautiful (KCSB) to clean up the site for us,” explains Natalie Watts, a senior public affairs specialist for CSU. “We pay them to do this. We utilize them whenever we have a lot of debris and trash. They get paid based on how much they clean up, based on the size of the cleanup. That can range anywhere from a couple hundred dollars to a couple thousand dollars. We’ve been using them for a couple years now. So far [as of August] 2020, we have spent $1,650 on cleanup efforts with KCSB. We expect that number to increase as they are scheduled to do cleanups at a few camps over the next couple of weeks. We plan to spend about $500 a month with KCSB for the remainder of 2020.”

According to the KCSB website, “we are independent of the City of Colorado Springs, but do a specifically defined scope of work for the city through an annually renewed contract.” In June, Dee Cunningham, KCSB’s executive director, appeared in front of City Council to testify on behalf of a proposed plastic bag fee. Cunningham described KCSB’s relationship with Colorado Springs Police Department (CSPD): “We started in 1997 with Chief Kramer [Lorne Kramer, CSPD chief from 1990-2001], who asked me to go to a spot that was kind of a big mess. He asked if I could help clean the situation and resolve the situation. I said of course, which led to a contract which was enacted late in the ’90s with the city for $45,000 a year with specific requirements.”

The revenue from that proposed plastic bag fee would have increased KCSB’s $45,000 contract to $135,000, according to documents provided to City Council. (The contract is with Colorado Springs’ Municipal Court and is designed to provide litter mitigation work for people ordered to do community service.) That additional funding would go to “support larger city-wide cleanup activity.” Cunningham claimed that the additional funding would allow KCSB to expand its operation. “We work with restorative justice programs, we work with court-ordered volunteers,” said Cunningham. “If I were able to expand our team and maybe get another truck, we would be able to be in three or four places at once, at least five days a week, which would make an incredible difference. We focus a lot on the trails and the waterways and things like that, but we also need to get more on the roads, more in neighborhoods, and I think the big thing we could do is so much focused education to help the community members understand the ramifications of plastics and litter in general.”

Though City Council voted against including the proposed bag fee on the November ballot, KCSB’s revenue comes from a variety of sources outside of its annual $45,000 city contract, and its 2019 tax filings report $170,079 in program service revenue.

“There is a $45,000 contract with the Municipal Court to provide litter mitigation as part of their community service program,” explains Kim Melchor from the city’s communications department. “This was sole-sourced in accordance with the City’s Procurement Rules and Regulations that allows Competition exceptions for Council-directed Contracts or agreements (per a contract signature cover sheet). The contract was executed in 2014 with annual renewals. The Parks Department also uses KCSB to maintain Memorial and Dorchester Parks.” According to Melchor, Colorado Springs paid KCSB $31,680 for the Dorchester and Memorial Park contracts in 2019, and $26,330 as of August 2020.

KCSB also performs litter mitigation for El Paso County. According to Ryan Parsell, chief public information officer for the county, “El Paso County has used KCSB to help clean up homeless camps around our jurisdiction. We have issued purchase orders to them but we don’t have a formal contract or agreement.” According to documents provided by Parsell, El Paso County paid KCSB $10,000 as of August 2020, and KCSB bills the county $600 per day for labor and $300 per day per container. KCSB also provides homeless camp cleanup services to the city of Manitou Springs. According to Alex Trefry, Manitou Springs public information and engagement officer, “We used to pay $600 per day for their services, but we now use our own dumpster for disposal, so the price is slightly discounted.” According to documents obtained via a Colorado Open Records Act request, Manitou Springs paid KCSB $1,200 in 2019, or $400 per cleanup.

Dumpster fees can certainly add up. KCSB has a partnership with Waste Connections, which not only donates to the nonprofit, but also provides it with heavily discounted dumpsters. “We donate and then they purchase services from us,” explains Ty Tostenson, district manager with Waste Connections. “It basically works out to free services. I know sometimes they have to wait for our donation before they can rent a dumpster.”

Labor isn’t cheap either. KCSB only has one full-time employee, executive director Dee Cunningham. As a nonprofit, KCSB relies on volunteers for much of its cleanup workforce. Cunningham admits that “about 90 percent” of volunteers are working as part of a court-ordered community service program. According to a document provided by Jane O’Day, chief probation officer for Colorado Springs Municipal Court, those who need to perform court-ordered community service are provided with a list of five nonprofits to choose from. However, “Individuals do have the choice of finding their own nonprofit organization to work with if they prefer,” says O’Day. KCSB is, however, the only nonprofit on the list provided by the Municipal Court that has a contract with the court, Melchor said.

KCSB’s most recent tax documents also reported 2,879 volunteers in 2018. According to Cunningham’s estimate, 2,591 of those were court-ordered. When asked about the source of the additional revenue the Indy was unable to account for, approximately $82,000 according to their 2019 tax filings, in the course of reporting, both Cunningham and KCSB Treasurer Amy Long declined to comment on that. Cunningham and Long, who is also the chief innovation officer for Visit COS, another nonprofit contractor with the city of Colorado Springs, also declined to comment on the expenses noted in KCSB’s form 990, which included $25,854 in “event expenses.”

KCSB’s board of directors in 2019 also included Tracy Scranton, a former Waste Connections employee, and Sid Santos, a CSPD officer. Lt. James Sokolik, CSPD public information officer, says, “He used to be on the board for KCSB but left that position to be the chair of a different nonprofit organization. Sid explained that he was on these boards as a private citizen and not as a representative of CSPD. CSPD has policies about volunteering in uniform or in a police capacity but does not have policies about a private citizen’s volunteer work.” During a phone interview, Cunningham claimed the members of the board of directors had changed, but declined to provide the names of current board members.