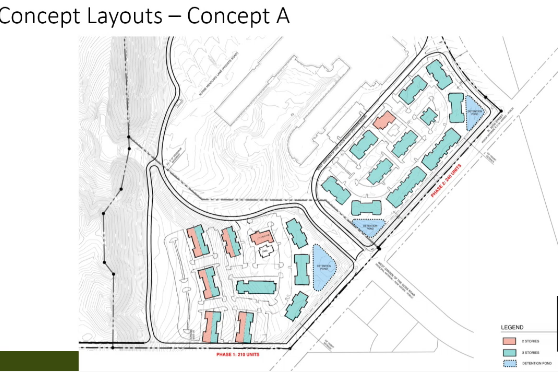 This layout of the apartment complex shows three-story buildings in blue. Note the proximity of some buildings to 30th Street on the lower right side. 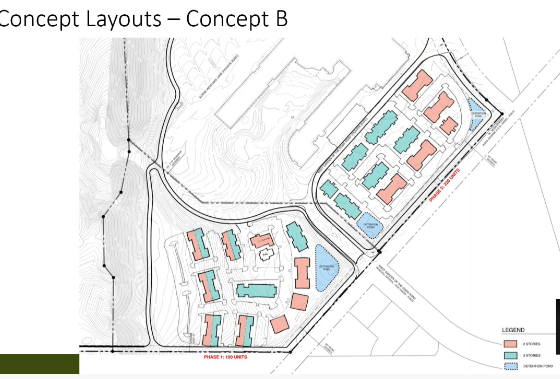 Concept B resulted after neighbors complained about density. The pink buildings would be two stories tall and sit farther from 30th Street and Flying W Ranch Road.

After a lengthy delay due to a dial-in technology malfunction, the Colorado Springs Planning Commission recommended March 18 that City Council approve rezoning 125 acres to allow apartments be built at 2424 Garden of the Gods Road, the gateway area to Mountain Shadows subdivision.

It was a 4-3 vote to approve the master plan change, rezoning and concept plan.

More than 6,000 residents of the area opposed the 420-unit complex planned by Vision Properties, citing possible blocking of views, encroaching on wildland interface areas and impeding of emergency evacuation routes due to increased traffic.

A Planning Commission hearing two months ago led the developer to modify the plan, lowering some apartment buildings from three to two stories, and moving them farther from main roads. Still, residents were not appeased and the proposal has become one of the more controversial development issues proposed to the city in the last year.

The matter now goes to City Council, which will consider it in coming months.

Slated to begin at 8:30 a.m. on March 18, the commission meeting was delayed over an hour because remote-engagement technology capped participation at 250 callers. When people flooded the line, the system locked up.

Agitated residents waiting to have their say suggested the hearing be postponed.

Scott Hente, who chaired the commission meeting, assured listeners, "We are as frustrated as you are. We want to get through this and we want to hear from everyone who wants to speak."

Asked about those technical problems, city communications director Jamie Fabos told the Indy in an email, "We haven’t had capacity issues on Teams [the program name], which has been used for the past year to provide a public input option during the COVID-19 Pandemic. This meeting was the first to ever exceed the Microsoft limitation of its Teams platform. I don’t have a historical listing of planning commission attendance prior to COVID-19 forcing the creation of a hybrid option, but I would suspect this attendance is far beyond what we have seen in the last year virtually, and certainly in past years when meetings were physical only."

The project is proposed on land occupied by a technology business park, once home to MCI, a telecommunications company later acquired by Verizon, which now occupies 40 percent of the building.

Vision Properties initially proposed 550 apartments in mostly three-story buildings 45 feet tall. After neighbors' objected, the plan changed to 420 units, and seven buildings were built to two stories. Those two-story buildings would be moved 150 feet from the right of way adjacent to Flying W Ranch Road and 30th Street.

Fifty-five acres on the west side would be reserved as open space, and city planner Katelynn Wintz said the owner is working through the city's Trails, Open Space and Parks preservation program. That suggests the owner is looking to sell, rather than donate, that property to the city.

Many residents complained of blocked views of the mountains, which N.E.S. principal and part-owner Andrea Barlow said are not protected by the city's hillside overlay ordinance.

Residents also said increasing the neighborhood's population could be  potentially dangerous if there were an evacuation due to a nearby forest fire, as occurred in 2012 when more than 30,000 people evacuated with no notice when the Waldo Canyon Fire swept into the city and destroyed some 350 homes and killed two people.

It's worth noting when Colorado Springs Fire Department organized its assault on the Waldo fire within the city, the chief staging area was at 30th Street and Garden of the Gods Road, the project's proposed site.

But Barlow noted the city's traffic engineering and fire officials OK'd the project. She also presented data from the Apartment Association of Southern Colorado showing apartment buildings in that vicinity are almost fully occupied.

"Demand outstrips the supply," she said.

As for arguments that the development is incompatible with the current master plan, approved in 1998, Barlow noted city code recognizes change over time and flexibility is needed to amend master plans to "conform to contemporary standards and current codes, policies and plans."

"We think what we’re proposing is the right use of the site," Barlow said, adding that city code supports increasing density in the corridor.

Bill Wysong, speaking on behalf of the Mountain Shadows Community Association, which opposes the development, warned its density would create a "choke point" during a similar evacuation, which isn't out of the question considering much of the city lies where wildland and urban development interface, he said.

In short, he said, "This project does not serve as benefit to surrounding neighborhoods... And it creates significant detrimental impacts to public health and safety."

Todd Frisbee, with the city's traffic engineering department, acknowledged that a survey of traffic in that area looked at peak hour flows but emergency response implications "is not an evaluation that is required by traffic engineering."

"From our point of view," he said, "it's a question of traffic management."

Commissioner John Almy voted against the project, noting it doesn't fit his image of infill development, developing vacant lots in fairly dense areas, such as downtown and its immediate surroundings, as the city has emphasized.

Commissioner Hente, who raised concerns over emergency traffic flow in January, said, "and I did not hear anything today that alleviated what I was concerned with two months ago." Hente lives in Mountain Shadows about 2 miles from the development. His house was damaged but not destroyed in the fire, but did have to flee the fire with a moment's notice. (Hente said he consulted with the City Attorney's Office about his residency posing a conflict of interest and was given the green light to participate.)

Wysong told the Indy after the vote, "They didn't see the value of our arguments. Most importantly, we come out of the planning commission meeting with no real definition of hillside overlay."

He said the association didn't know if it would appeal the Planning Commission decision or make a stand before Council.

Hente said after the meeting it's unclear when Council will hear the issue due to the April 6 city election, where a second reading could be considered by members not currently serving.

Thus, the case might land in the new Council's lap in May, he said.