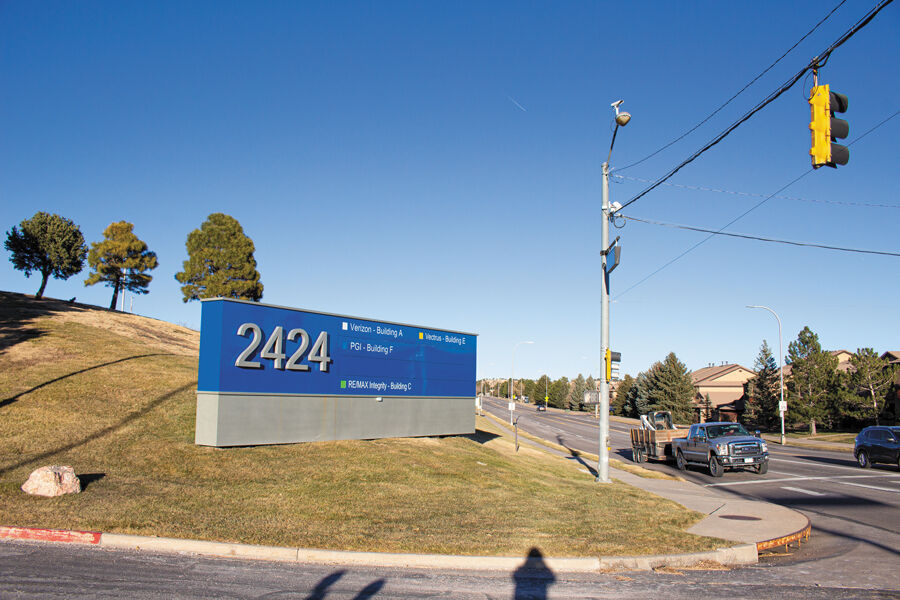 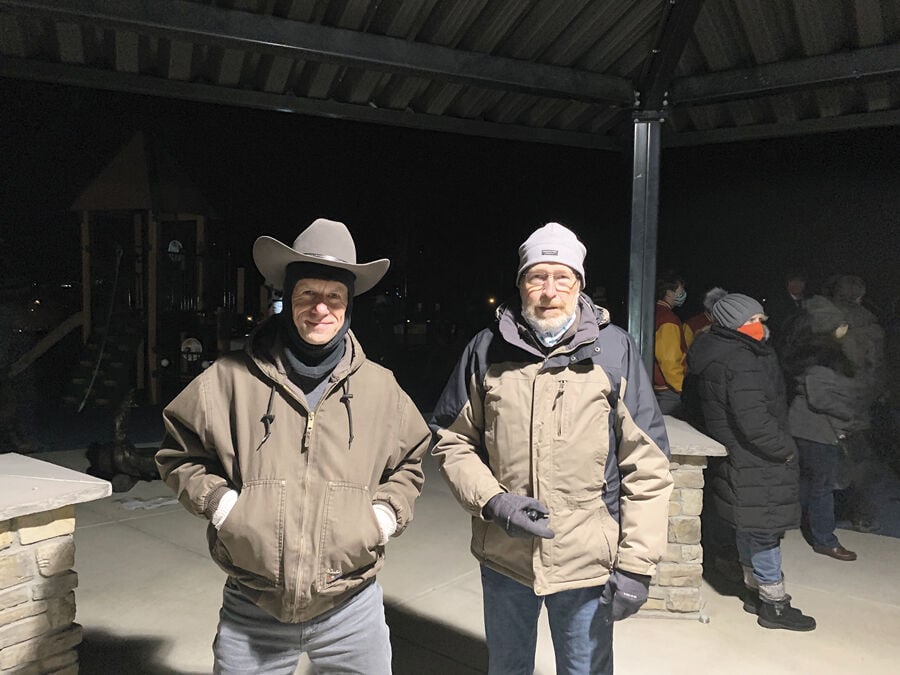 Chris Mitchell, left, and John McLain have concerns over the proposed rezoning.

A proposed rezoning at 2424 Garden of the Gods Road has generated consternation among those living in the nearby Mountain Shadows neighborhood. Residents and members of the Mountain Shadows Community Association have raised concerns about increased population density and its potential impact on traffic, wildlife and Garden of the Gods Park. But Andrea Barlow, a planning principal and one of the owners of N.E.S. Inc., the land planners working with owners Vision Properties on the rezoning application, says some of the residents’ concerns are misplaced.

In August, Florida-based Vision Properties applied to change the current zoning (planned industrial park) to a planned unit development to potentially construct multifamily residential units. The rezoning, which is under review by the Colorado Springs Planning and Community Development Department, is still in its early stages. If approved by the planning department, it must also be approved by the Planning Commission and City Council, and any future development would require a similar application and approval process.

The 125-acre site west of 30th Street is home to a 724,086-square-foot office park. Originally occupied by MCI, a telecommunications company later acquired by Verizon, the building is currently filled to 40 percent capacity and is occupied by Verizon and tech company PGi. The vast majority of the 3,620 parking spaces sit empty.

“The problem and the disagreement that we are running into is that the community of Mountain Shadows believes that the developer’s plan is out of place with the current modality of land use.”

One of the residents’ main concerns is the impact high-density housing, such as an apartment complex, could have on the area. “The problem and the disagreement that we are running into is that the community of Mountain Shadows believes that the developer’s plan is out of place with the current modality of land use,” says Mitchell during a phone interview. “We see this as negative because of its impact on the natural beauty and the ecosystem of the area, and we see it as overdevelopment of the area.”

Eddie Hurt, a Mountain Shadows Community Association board member, is concerned about so many new residents utilizing nearby Garden of the Gods Park. “The overuse is dramatic in the park, especially in the last couple of years as it was announced the No. 1 city park in the country,” he says. “It’s just mushroomed the amount of people coming through. In addition to that, all the COVID has done that as well. It’s a combination of traffic, with cars and bikes, and also tour buses, shuttles, Jeep tours. It’s a well-known fact that the city can’t keep up with it as it is. You put an apartment complex community right there with thousands of new residents, and they’re going to make access to the trails even easier, it’s just going to exacerbate the problem. The beautiful crown jewel that we have as Garden of the Gods is not going to be a crown jewel anymore.”

John McLain, a member of the Mountain Shadows Community Association’s Action Committee, is concerned new buildings will obscure the area’s scenic views. “We’re concerned that [the developer] is not addressing all the specifications that are in the hillside overlay plan [additional regulations for new construction that limits the height of buildings to 45 feet]. Their proposal right now is to develop along 30th Street and part way along Flying W Ranch Road. They’re going to put these multifamily units right next to the road. When you place a 45-foot building on the hill that’s already 25 feet high, it looks like a seven-story building, and it will completely block the view. We have 6 million tourists that come into this city every year, and most of them come up Garden of the Gods Road, and the city really needs to honor that hillside overlay concept, so that when the tourists come in, they see this natural extension of Garden of the Gods.”

Peter Wysocki, the director of planning and community development for Colorado Springs, explains that the hillside overlay does not apply to the proposed redevelopment area. “An overlay is additional regulations that apply above and beyond the standard city code zoning requirement,” he explains, “In this case, the westernmost part of the property has some significantly steep slopes, and it falls under the hillside overlay provisions or standards. In this case, the applicant is preserving the hillside as open space, and it’s about 55.4 acres.”

Barlow says she tried to address concerns about the rezoning during a virtual neighborhood meeting. “One of the challenges we are having is that the neighbors are putting their own interpretation on what we are actually proposing,” she says. “We tried at the first neighborhood meeting to explain exactly what the plans were, and what the intent was, and we have another neighborhood meeting coming up [on Dec. 10].”

Barlow notes the potential multifamily housing project would redevelop the existing space and not use any of the land to the west of the existing building. “We’re not developing undeveloped land here,” says Barlow. “The existing parking lot for [2424 Garden of the Gods Road] is vastly underused and exceeds the city’s parking requirement by about a thousand spaces, so there’s an area at the front of the building that fronts onto 30th Street that has potential for development, which is their existing parking area. There’s an area just to the left of the entrance, which has been graded and partially concreted as a parking area that was developed as an overflow parking area.

“Clearly they don’t need that if they’re not using their existing parking. It’s those two areas we’re looking at with potential for future development.”

The concerns about population density are also overstated, according to Barlow. “There were rumors going out there that there were going to be 3,000 apartments here,” she says. “Initially we did a ballpark [estimate], thinking we could maybe get 550 units, and that’s what we put forward at the neighborhood meeting a couple of months ago. Since then we have really looked in more detail and have brought that down to 450, so we’ve reduced the number of units by 20 percent from what we were proposing, not the neighbors’ estimates.

“The other big concern is traffic. I’ve got here a postcard they’ve sent out to all the neighbors in the area, and they’re saying there’s going to be 7,000 more vehicles on 30th Street. That’s about three, four times as many vehicles as a 450-unit [complex] would be generating. Everything is kind of being misinterpreted. I don’t think it’s intentional. They are reading what we submitted and reading something else into it.”

“One of the challenges we are having is that the neighbors are putting their own interpretation on what we are actually proposing.”

Barlow also notes that any new apartments at the site would be rented at a market rate, not subsidized or affordable housing. She says concerns about new developments in established neighborhoods are common, but such developments will become more common as Colorado Springs’ housing market continues to grow. “There’s really very little [housing] below $300,000 or $250,000 that’s new coming onto the market,” she says. “For years Colorado Springs was really behind the curve on apartment [construction]. There’s nowhere for them to move up to. They’re in their initial apartments and there’s nothing new to move up to, apartment-wise. There’s no housing they can afford to buy at that entry level, and so there is a gap both in truly affordable housing for people on low incomes, but also just that basic, entry-level [housing] for people on the median income in the city; there’s nothing for purchase or to rent in this market. It’s starting to change but with change, a lot of it is infill, and the infill tends to get more opposition than the kind of newer development out east.”

Wysocki notes that urban infill projects, which are encouraged in PlanCOS, the city’s master planning document, are important for the long-term health and vitality of neighborhoods. “The new development is important, but we cannot forget redevelopment and revitalization of our established neighborhoods. We need to have strategies on how we revitalize functionally obsolete shopping centers, functionally obsolete business parks that are no longer needed or no longer desirable, or sort of that development character of 25, 30 years ago. There is emphasis in PlanCOS that the city should be supportive of projects that redevelop sites that have been vacant, that are so large in size they are not appropriate for businesses in current years. In our opinion, this site meets the vision and the policy direction of PlanCOS.”

“When you look at some of the other projects that you would consider infill or redevelopment in mature parts of the city, particularly in the Southeast, or even in the greater downtown area, or the Ivywild area, they have created some positive effects,” Wysocki notes. “There’s coffee shops, there’s new restaurants. Yes, there might be some higher-density housing, but what that means is there’s more residents to support those businesses to thrive. When you look at citywide redevelopment opportunities, like South Academy, for example, like Platte [Avenue], like this area [Mountain Shadows], like Ivywild, Patty Jewett area, North Nevada corridor — those are all areas identified as ripe for redevelopment, because if there’s not redevelopment they just continue to dilapidate and become obsolete.”