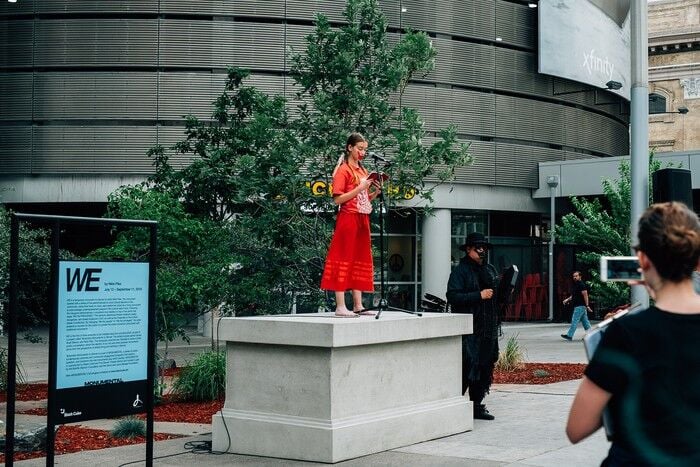 As part of the Downtown Partnership's Art on the Streets launch party on Aug. 7, a group of performers activated the piece "We" by Nikki Pike. All artists came from underrepresented communities, and were paid for their performances. 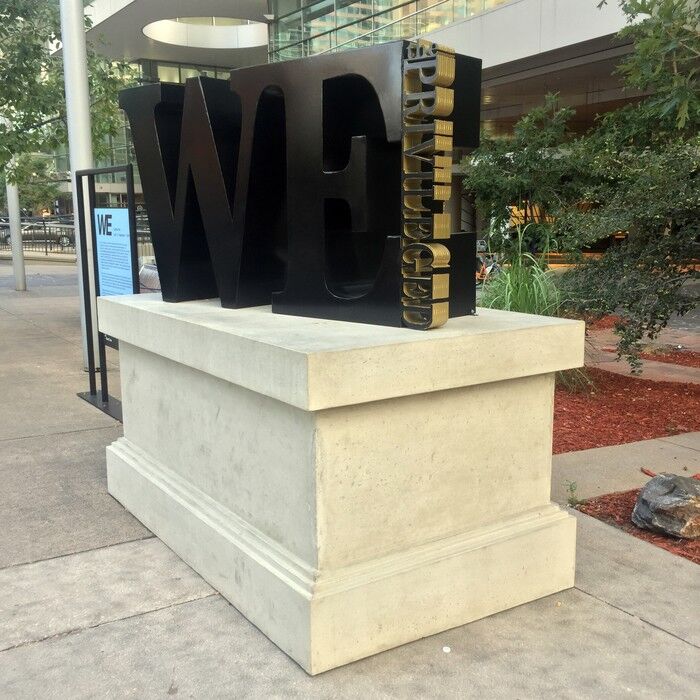 No, you haven’t left a skipping LP on your turntable... it’s endlessly repeated how unusual and precarious these times are for artists and performers because of how unprecedented a situation the COVID-19 pandemic has become.
While newly formed groups such as the National Independent Venue Association (NIVA) and the National Independent Talent Organization (NITO) continue to advocate for proposed congressional aid packages such as the Save Our Stages Act and the Restart Act — both of which are possible life preservers for the future of live performance venues and working artists — imminent arts funding at the federal level is anything but assured.

If “top-down” support for the arts doesn’t come before we move into the autumn and winter, what can be made of bottom-up, local efforts to help the arts weather the ongoing storm?

Some of the safest performance opportunities are smaller, outdoor gatherings, both of which have been auspiciously facilitated by both the Downtown Partnership, notably in its recent Art on the Streets Launch Party, and the Cultural Office of the Pikes Peak Region (COPPeR), through its July launch of the “Curbside Culture” program.

“[Curbside Culture] brings the performing arts out into the community by facilitating small-scale live performances, in appropriately social-distanced circumstances, outside of private residences, places of business, and other gathering spots,” says Andy Vick, executive director of COPPeR.

The Bee Vradenburg Foundation, meanwhile, has found success with its programs incentivizing First Friday art purchases and partnered with the Pikes Peak Community Foundation to create an artist recovery fund and raise almost $90,000 to support artists in the Pikes Peak region.

“We knew that individual artists would be the most vulnerable, not being eligible for unemployment as independent contractors,” explains David Siegel, the chief executive officer of the Bee Vradenburg Foundation (and a face familiar to music fans, performing with Grass It Up and Mango fan Django).

As the pandemic lingers on, the Foundation has also initiated COVID recovery grant funding for arts organizations, focused on helping them maintain relevance and resilience, while enabling capacity-building.

When it comes to resilience and relevance, Siegel explains: “Art from February 2019 feels like it’s from a bygone era, so rather than taking work you already had and trying to fit it into the virtual ‘peg,’ you can create new work for this format.”

A process that requires new and creative thinking for new times. Siegel notes that artists and organizations feel immense pressure to keep pushing out work, and that’s not always the best way to create meaningful art. It’s an approach that stands in stark contrast to the (deservedly criticized) stance of Spotify CEO Daniel Ek, who recently said musicians just need to work harder in this age of streaming.

All that said, when it comes to the larger state of public arts funding in Colorado Springs and across the country, Siegel doesn’t mince words.

“It’s really striking. The communities that understand how important art is to their whole ecosystem and societal identity put their money where their mouth is. Places like Denver, Boulder, Portland ... I could go on ... they all made big municipal investments into sustaining arts and culture early on in the pandemic. I’m sorry that Colorado Springs doesn’t see the return on making that investment, but here we are. The communities who made those investments are going to be so far ahead in the recovery.”