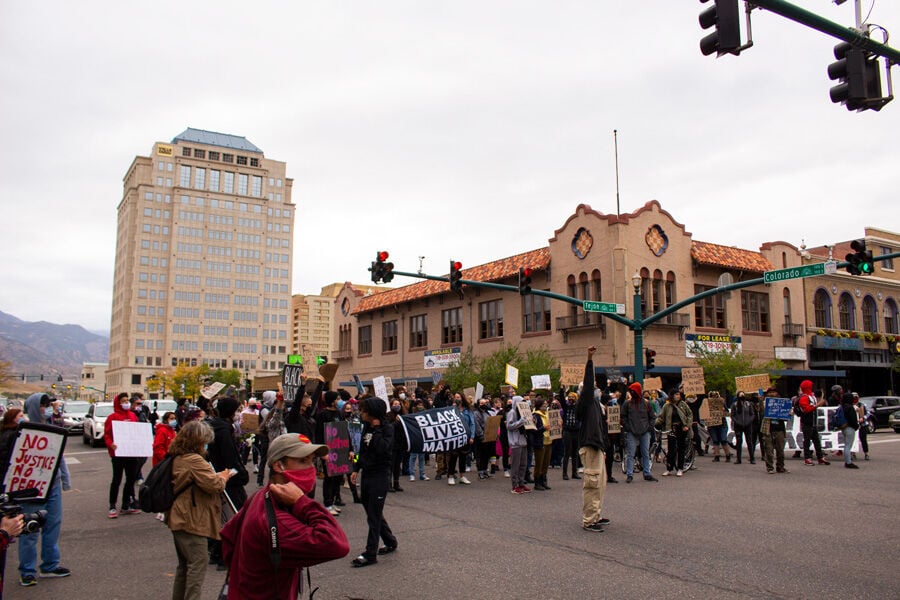 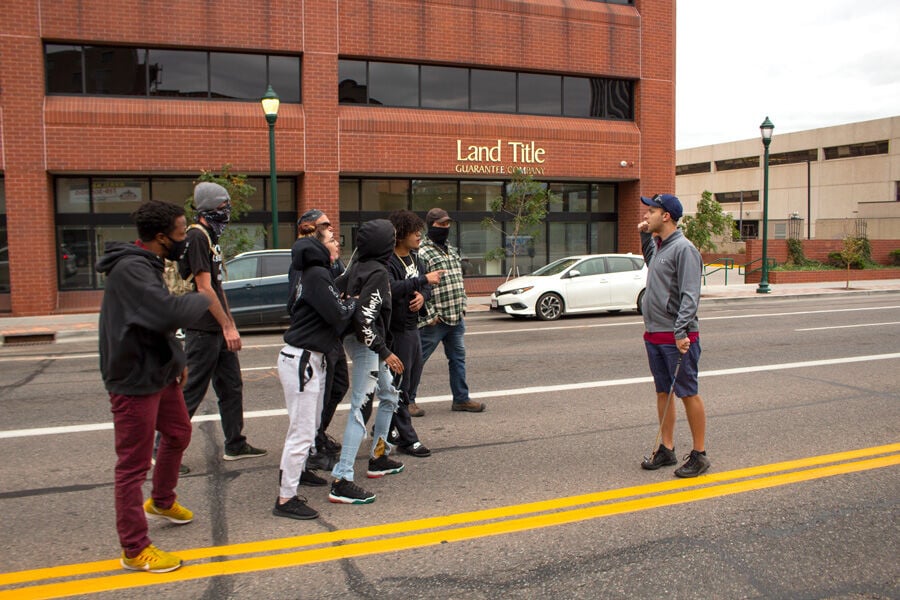 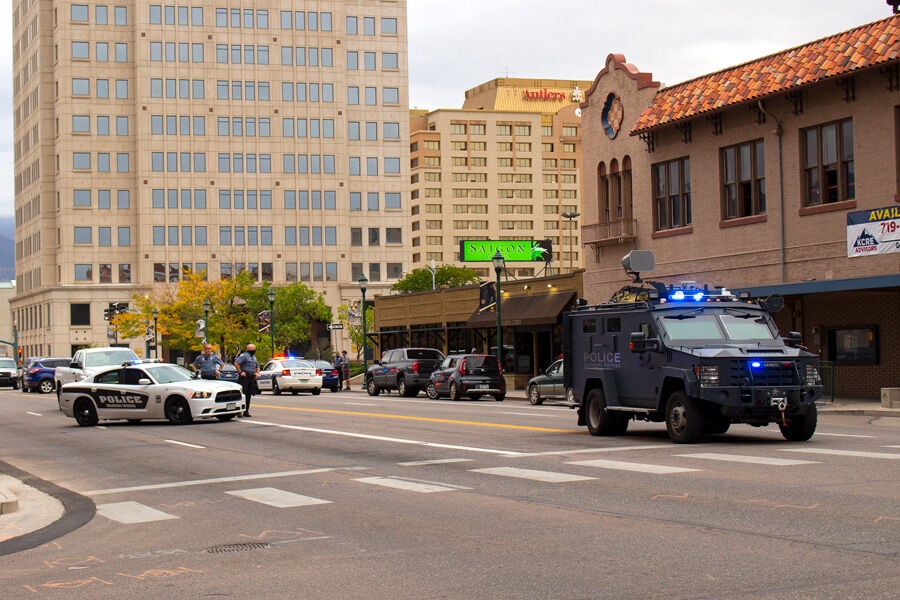 The police used a BearCat to respond to protests and declared the gathering an unlawful assembly. 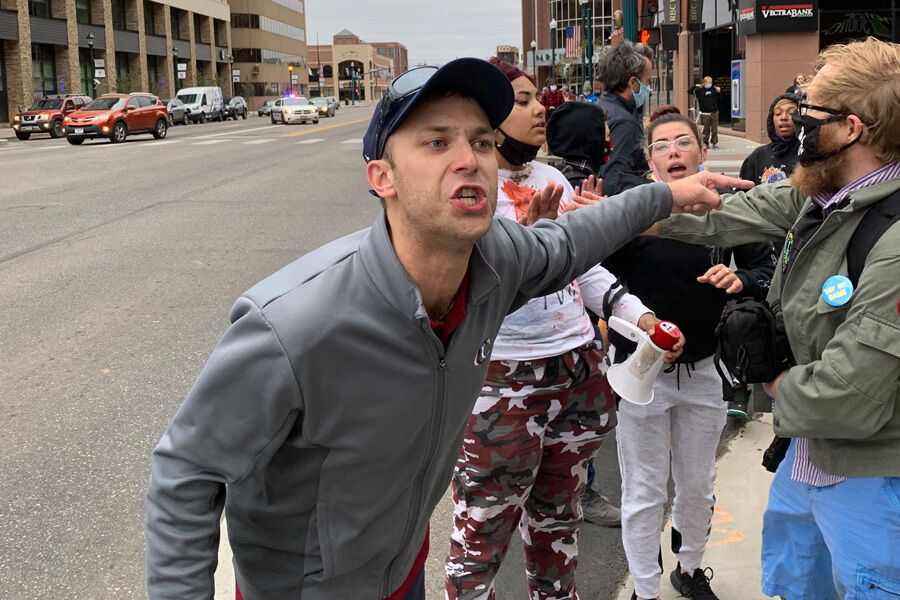 A driver who had wielded a golf club calls protesters “terrorists” after being disarmed by crowd.

A protest march was declared unlawful by the Colorado Springs Police Department after a car drove into the crowd at the intersection of Tejon Street and Colorado Avenue Sunday, Sept. 27, nearly hitting some of the participants. The march was in response to the  Kentucky attorney general’s recent declaration that he wouldn’t indict Louisville police officers for the March death of Breonna Taylor, a Black woman.

After driving the vehicle into the crowd, its operator parked and confronted protesters while wielding a golf club. Multiple CSPD vehicles, including an armored BearCat personnel carrier, responded to the scene and declared the assembly “unlawful.” According to Ari Weill, a terrorism researcher at the University of Chicago, there have been 104 incidents of drivers confronting protesters — 96 by civilians and eight by police — and 39 drivers have been charged.

The Sept. 27 incident is the third here since activists began organizing protests around the Black Lives Matter movement and issues relating to racism and police violence in Colorado Springs. On June 1, the driver of a red SUV drove through a crowd of protesters on Nevada Avenue, and on June 3, Nicole Hennigan was injured after a Jeep was driven through a group of protesters in front of The Antlers hotel on Cascade Avenue.

Dalinn Harkins was almost struck by the vehicle at that Sunday protest. “I waited at the back of the line in hopes that the crosswalk would come on,” she recounts. “When it did, I was walking just outside of the crosswalk. This man was charging into the crowd [with his vehicle] and then he swerved towards me. I jumped out of his way and kicked his car.”

After parking his vehicle along Colorado Avenue, Harkins says, “He then gets out of his car, and proceeds to chase me with a golf club. After that, the crowd chases him down, gets the golf club out of his hand, without harming him — I watched, no angry white men were harmed.”

CSPD units arrived on-scene within seconds, and Harkins says, “He then runs up to the police and is like, ‘They’re terrorists! They tried to attack me! They attacked my car! I didn’t do anything!’ After that, the police escorted him to his vehicle, and the crowd walked away unharmed.”Lt. James Sokolik, CSPD public information officer, states, “that incident is still under investigation and no arrests have been made at this time.” Sokolik also noted that the June 3 Jeep incident was “handled through mediation between the two parties,” and “the incident with the red SUV is still under investigation; no arrests have been made in that case at this time.”

CSPD arrested 70 protesters between May 30 and June 3 for failure to disperse and obstructing a peace officer. CSPD also arrested 13 Black Lives Matter protesters for charges stemming from the June 30 protest that blocked the northbound lane of Interstate 25, and three protesters involved in an Aug. 3 protest in the Pulpit Rock neighborhood.

Across Colorado, the response to vehicular assault incidents has varied. Arapahoe County District Attorney George Brauchler declined to press charges against the driver of a Jeep that drove through a crowd of protesters on Interstate 225 in Aurora in July. In Denver, Jennifer Watson was charged with misdemeanor assault and reckless driving in July for striking Max Bailey with her car on May 28, two months after the incident occurred.

On July 25, a man was arrested in Eaton after driving through a pro-police rally. He was charged with attempted first degree assault, felony menacing and reckless driving. On Sept. 23, Jonathan Benson drove into a Denver crowd that was also protesting the decision in the Breonna Taylor case, but was not cited.

Denver’s Westword reported that Benson bragged about striking a protester with his car in 2017 during unrest over Trump’s inauguration, quoting a Facebook post in which he wrote, “He wore my windshield nicely for a second and got 3 snowflake points for breaking my mirror in the process, but his participation ribbon will be coming in the form of hospital discharge papers and criminal charges.”

“It’s pretty upsetting,” says Harkins. “These handful of people, what is so wrong with these people? People are out here fighting for change in this world, we’re fighting for everybody. Human life is so beautiful. Why do people go out of their way to harm people? The violence and everything, especially when they see us out here trying to make a difference, whether they agree with it or not, is just heartbreaking. My mental health has not been well since all this started.”

Human life is so beautiful. WHY DO PEOPLE GO OUT OF THEIR WAY TO HARM PEOPLE? My mental health has not been well since all this started.

Matrice Ellis, a Colorado College student who attended the Sept. 27 protest to raise awareness about a proposed contract between Colorado College and CSPD, echoes Harkins’ sentiments. “I’m Black, so every time I walk out of the house I feel that way,” says Ellis, who is from Ferguson, Missouri, where in 2014 protests erupted in response to the police killing of Michael Brown. “So I’m familiar with this type of behavior. It’s not shocking to me, it’s expected.”