The CSPD issued a statement on July 28 saying, "After reviewing the charging documents, Jared Whiteman has been placed on administrative leave without pay, effective today, July 28th, 2022. Jared Whiteman was hired with the CSFD on March 3rd, 2017, and currently holds the rank of Firefighter 1st class. As this is an ongoing case, there will be no further comment at this time from the CSFD."

A Colorado Springs firefighter has been charged with theft stemming from claims he stole nearly $200,000 from people who hired his side business to do construction work.

First reported by KRDO, Jared Whiteman and his wife, Jamy Whiteman, failed to hold their customers' funds in trust for payment, over-invoiced their customers for work, took down payments for projects but didn't complete the work and didn't make refunds to customers, according to an affidavit obtained by the station.

"The affidavit said 20 business entities were victims of Whiteman's," KRDO reported. "Whiteman turned himself in at the El Paso County Jail on June 28, 2022. He was booked into jail for Theft ($100k-$Million), a class 3 felony."

Whiteman, hired by the CSFD in March 2017, ran a company called Fortified Solutions, which he said in a recent CSFD request to perform outside employment was engaged in construction, design, planning and development and construction management.

He said on that form, dated Feb. 7, he worked 20 hours spanning three to four days per week on his business, and started the company in 2018. The Secretary of State's business records corroborate that, though he initially sought permission from CDFD to do outside work in March 2017.

Fire Chief Randy Royal signed off on Whiteman's Feb. 2 outside employment request, which you can see here: 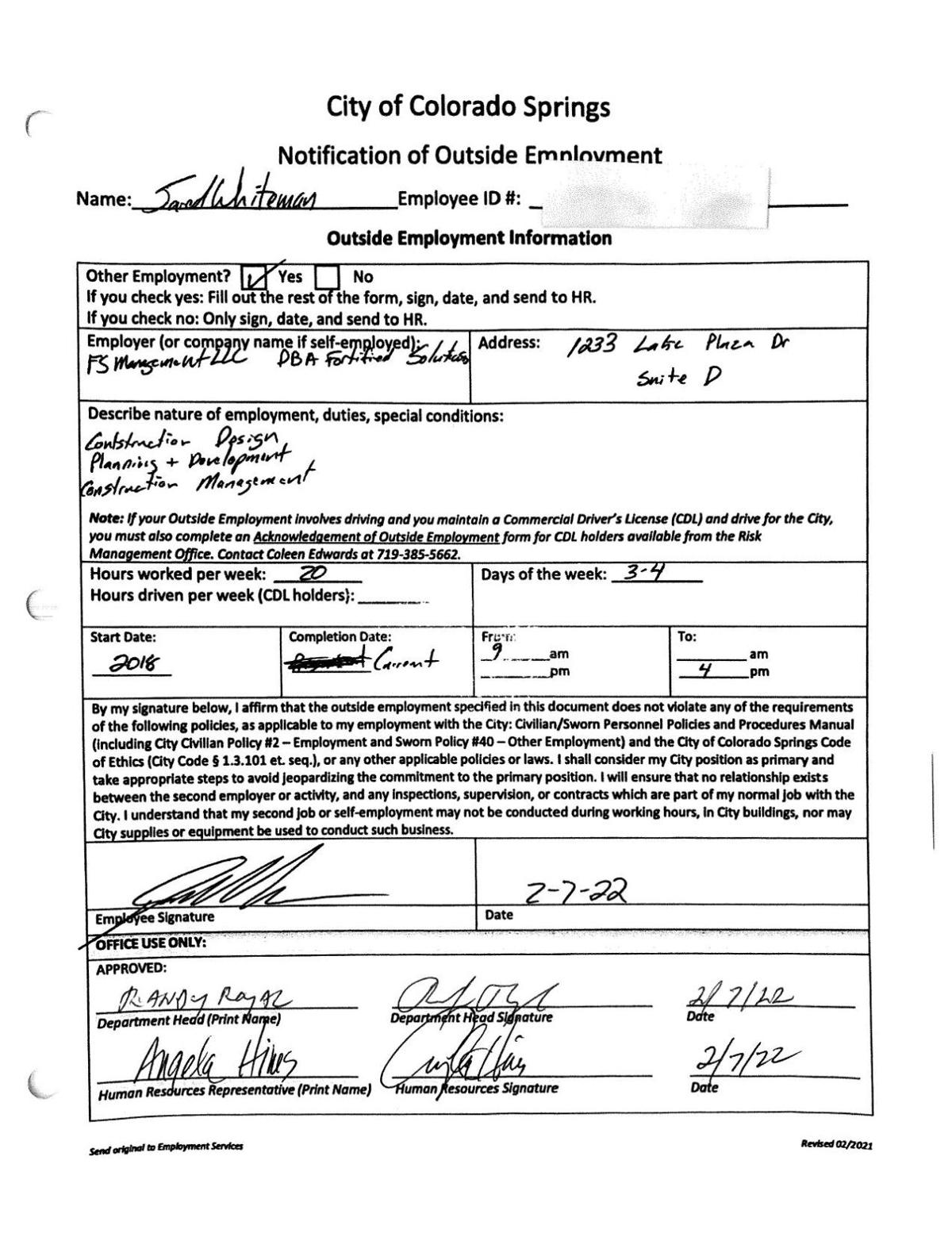 "A brainchild of the dynamic Whiteman duo, Fortified Solutions came into existence in 2017. We are committed to building custom homes and commercial spaces that exceed your expectations," the company's website says. That contradicts the filing of articles of incorporation with the state in 2018.

CSFD spokesman Mike Smaldino says via email, "Currently Mr. Whiteman is on paid administrative leave per city policy. Until his charges are reviewed by the Fire Chief and city legal, they will determine at that time his employment status."

Smaldino declined to comment on whether Whiteman's activities reflect poorly on the department, saying, "As this is an ongoing case, there is no comment at this time."

The matter involving Whiteman comes after the Indy's April 2021 investigation of firefighters holding outside jobs, which found, among other things, that:

• The records the city keeps on firefighters’ outside employment make it impossible for the public, let alone their supervisors to know for sure who’s doing what when, or whether any of that work intersects with the city in a way that might pose a conflict of interest.

• While firefighters are asked to disclose hours per week they spend on outside jobs, an Indy investigation found that some file Outside Employment Forms only after they’ve started or finished the work and many never file them at all, leaving the administration in the dark.

Records obtained by the Indy for that investigation show that Whiteman first sought permission to do outside work on March 21, 2017, which was eight days after he was hired on March 13, 2017. His request was approved to do "exterior contractor" work for four hours per week.

The Indy's investigation led the CSFD to change its policy to require employees to fill out or update any changes in status to their outside employment at the beginning of every year or throughout the year as needed.