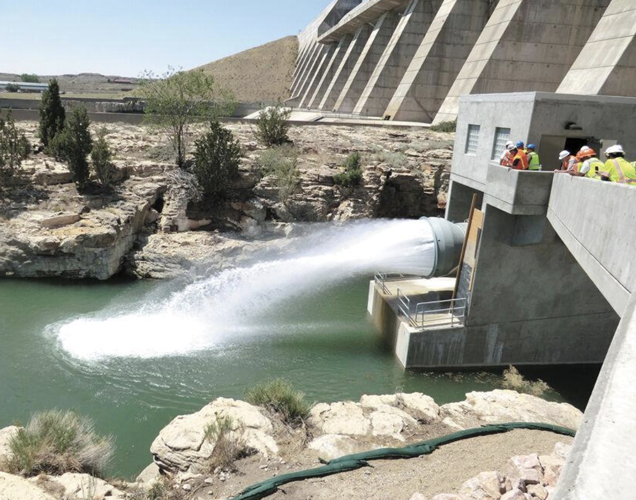 Pueblo Reservoir is the source of water pumped to Colorado Springs through the Southern Delivery System, finished in 2016. Now, more water projects will force up water rates, as Springs Utilities eyes a 26 percent budget increase in 2023. 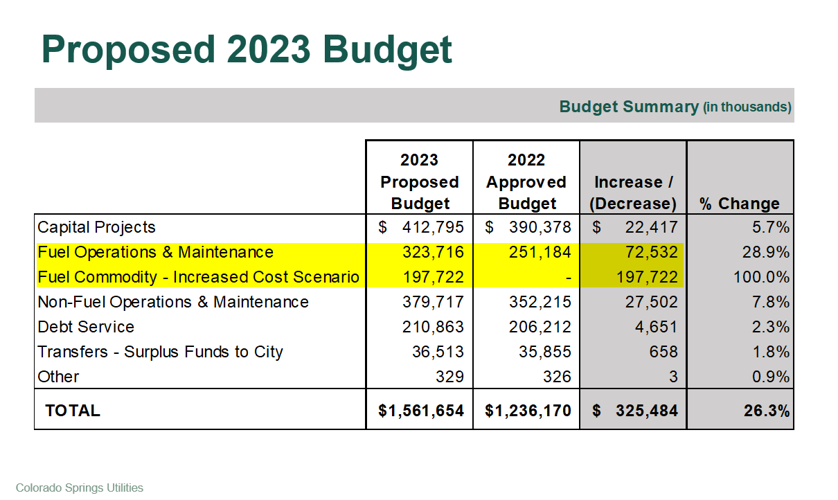 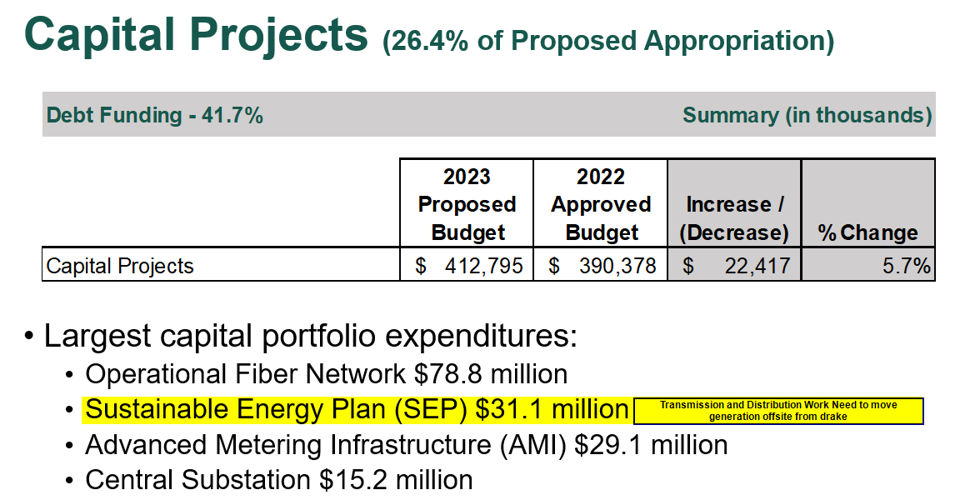 Utilities Board Chairman Wayne Williams says most of the budget increase is to account for the volatility of natural gas prices. Although Utilities does hedge against price fluctuations, it's not possible to anticipate all changes or what will happen, he says.

In Washington, D.C., on a Colorado Springs Chamber and EDC trip, Williams says he asked Sen. John Hickenlooper, D-Colorado, about the uncertainty surrounding natural gas prices and Hickenlooper said, "No one's going to build a refinery if this is an energy source that in the next decade is not going to be used at all." (Many utilities are moving toward renewable sources, like wind and solar.)

Williams also says the 10 percent pay raise is designed to retain and attract workers at a time when filling the ranks is difficult.

Here are two charts he provided that further explain the budget proposal:

Colorado Springs Utilities is blaming inflation in large part for a whopping budget proposal for 2023 that calls for spending 26.3 percent ($325 million) more than this year — a rise from $1.2 billion to $1.6 billion.

City Council, which comprises the Utilities Board, is slated to approve the budget and a rate increase on Nov. 8.

We've reached out to Board Chair Wayne Williams, one of several candidates for mayor in next year's April city election. (He accepted a $2,500 contribution from Utilities CEO Aram Benyamin for his campaign.)

Williams said in a text message that he was unable to discuss the budget proposal with the Indy on Wednesday, because he's in Washington, D.C., with the Colorado Springs Chamber & EDC.

On its website, Utilities states, "This increase is primarily the result of higher costs for capital projects, driven by inflation and a global increase in natural gas prices."

It then enumerates capital projects, which make up about 26 percent of the budget.

• Operational fiber network at $78.8 million, which we wrote about here, here, here and here, explaining how revenues predicted by Utilities might not pan out as planned. Utilities also wants to spend $31.1 million for a Sustainable Energy Plan, $29.1 million on smart meters, $15.2 million on a central substation that would claim several businesses and border a residential neighborhood along Austin Bluffs Parkway, and $12.8 million for new generation, though the Downtown Drake Power Plant was recently shut down.

• Surplus funds transferred to the city are projected to remain flat in 2023.

All that means Utilities customers will pay more. Not only will there be a fuel cost adjustment this winter, which Utilities warned about a few days ago, but it also plans to hike water and wastewater rates by 5 percent and 4 percent, respectively.

"This is an annual adjustment to pay for the cost of system-wide infrastructure projects. Primary drivers include inflationary increases in labor, benefits and system maintenance. Increases will also be used to fund infrastructure investments in projects like smart meters, replacing aging water mains and rebuilding and refurbishing water tanks," Utilities says.

If the Utilities Board approves the rate increase in November, the typical residential bill would go up $5.21 per month for water and 84 cents for wastewater, effective Jan. 1.

At least one citizen is crying foul.

Tim Leigh, a former City Council member who runs a real estate firm, calls the budget spike "Outrageous given the financial condition of the country, inflation, and uncertainty with respect to jobs and recession."

Leigh tells the Indy via email that he questions much of the increased spending, starting with the fiber project, which Utilities says will cost about $600 million but will be largely funded by a fiber vendor, Ting, though it's unclear whether the contractor will be able to attract ample customers in the local market where multiple other fiber companies are currently installing fiber.

"What is the case that says we need fiber to compete against Comcast and Century Link and other private market solutions who are already installing fiber throughout the city at NO cost to the ratepayer?" Leigh says.

As for the smart meter program, Leigh wonders if it can be postponed until "the economy settles."

Leigh says by phone that Council, acting as Utilities Board, should pause the budget and "live within their means."

"Nobody's gonna die. We're all going to get utilities," if there's no spike in the budget, he says.

When he saw the budget figure, he says, he was "astonished that the City Council or somebody wouldn't stand up and say something. Why do we have to spend this money with inflation running at 8 percent and people are suffering?"

He also questions whether employees need a 10 percent increase when some workers in the community are getting no raise or small raises. "It doesn't feel fair to me," he says.

"I'm not sure I know any organization that would dare ask for a 26 percent budget increase," Leigh adds, noting, moreover, that the 2024 budget plan calls for yet another 11 percent increase.

"My call to action is to put an immediate hold on the 2023 budget and revisit the entire budget," Leigh says.

More long term, Leigh says the Utilities Board should be a separate elected board comprised of people with expertise in utilities, rather than City Council. That strategy was tried some years ago and never made it to a ballot for citizen approval, however.

"We should be able to trust the people we elected to look out for the citizens," Leigh says. "No way anybody who approved that budget is looking out for the little guy."