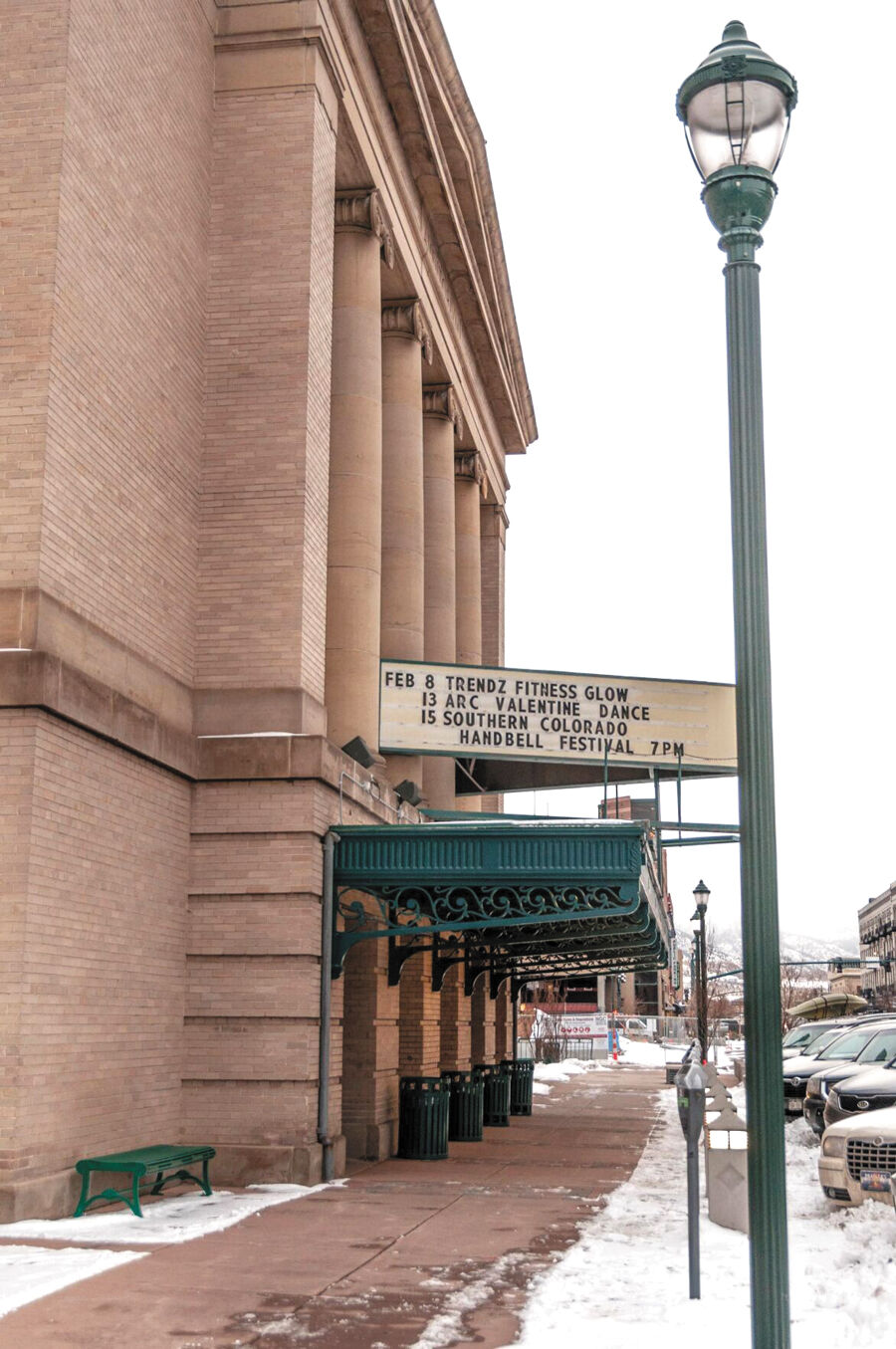 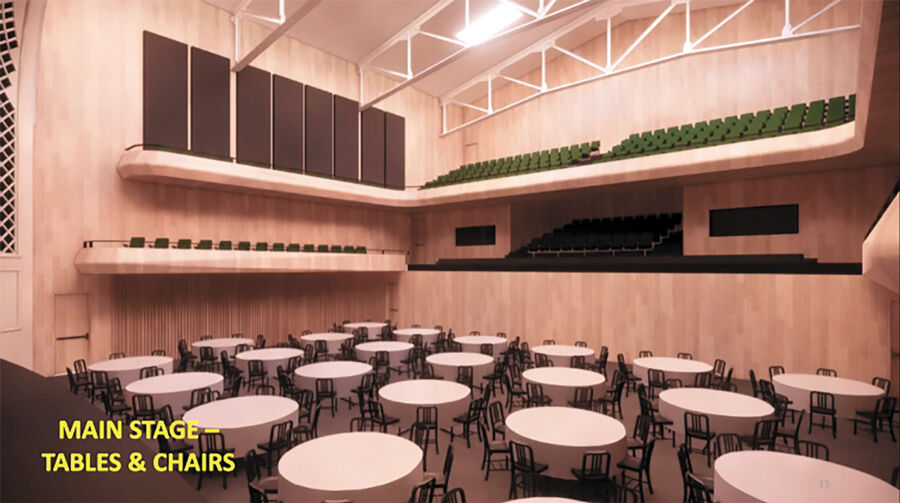 The capacity for events in the main hall would be reduced to 600. 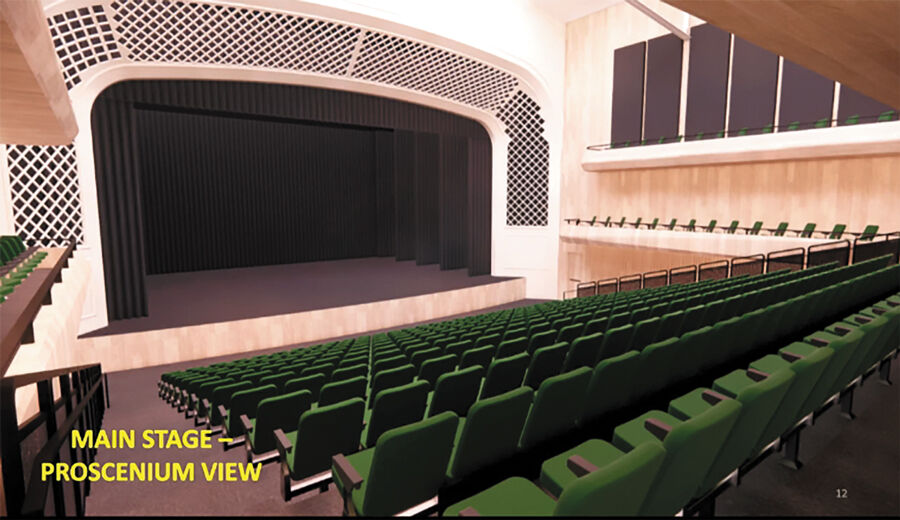 Plans for the auditorium’s primary stage would include theater seating.

A group of local heavy-hitters led by Colorado Springs Conservatory founding CEO Linda Weise wants to pump $53 million into City Auditorium to rejuvenate it as a cultural asset that would host arts and music events, nonprofits, businesses and visiting acts.

For years, the city has been grasping for a plan to overhaul the landmark at 221 E. Kiowa St., built in 1923, to make it pay its own way and diversify its offerings. The auditorium has been used in recent years for roller derbies, metaphysical fairs, music programs, social events and even funerals. In 2008, citizens attended the memorial service there for long-time Colorado Springs Mayor Bob Isaac.

The facility can seat roughly 3,000, but plumbing, electrical and other components of the building are long overdue for repairs and/or replacement.

Enter Weise, who’s taught music and drama to youths in the region for 30 years at her conservatory. She’s assumed the title of president and CEO of the newly formed Colorado Springs Community Cultural Collective, which proposes to take on the project of remaking the auditorium. High-profile local businesspeople and philanthropists make up the collective’s board and advisory council.

“Is that too big of an apple to take a bite out of right now?”

In that role, Weise told El Paso County commissioners on June 15 in a bid for a $10 million donation, that she’ll guide the effort to usher in a second century for the Classical Revival structure.

The city lacks the necessary resources for renovation and optimal operation, she said. But under the care and ownership of a nonprofit, she noted, the facility could satisfy a variety of needs and add to the city’s ability to draw visitors, as well as stimulate the local arts scene.

However, giving away the facility requires more than a simple vote by City Council, according to the city’s real estate manual.

The building lies within the City Auditorium Block Urban Renewal Area bounded by Kiowa on the north, Pikes Peak Avenue on the south, Nevada Avenue on the west and Weber Street on the east.

Its most recent use was as an isolation shelter for people experiencing homelessness who were diagnosed with or showing symptoms of COVID-19, and it was closed to all other events and activities.

According to the building’s National Register of Historic Places registration form, “The total cost of construction was $424,910.30 [$6.4 million in today’s dollars]. This amount included furniture, fixtures and stage equipment. ... A cartouche in the center of the arch [over the stage] displays, in raised letters, “USUI CIVIUM DECORI URBIS,” translated as “For the Use of the People and the Glory of the City.” City Auditorium was added to the National Register in 1995.

Used initially for concerts, theatrical performances and graduations, it staged boxing and wrestling matches in the 1940s. The facility is home to the “Mighty Wurlitzer Theatre Pipe Organ,” installed in 1927, and featured periodic organ concerts through the years. Weise says the organ will remain in the auditorium. The Lon Chaney Theatre, which seats 230, will be moved from the east side to the west side, she said.

The group’s plan proposes to redesign the facility, expanding it from 40,000 square feet to 90,000 square feet. An addition would be built on the south side, and new floors added to capitalize on the building’s size.

To make way for various studios, classrooms, music, dance and drama spaces and the like, the building would be overhauled to create an additional floor within it. The partial basement would include a main stage, cabaret venue and commercial speakeasy. The ground floor would host “retail partners,” and the stage and gymnasium area would be revamped into a smaller venue, reducing seating from 3,000 to 600, relying on roll-away seats to create an open space that could be used for dining tables or a standing audience.

Being part of the URA means the project might benefit from tax increment financing (TIF), but the Colorado Springs Urban Renewal Authority’s development agreement doesn’t mention forwarding those funds to the auditorium.

Rather, proceeds from the tax increment — the amount of tax generated above the base level prior to development of the URA — are earmarked to retire bond debt for the URA project and fund about $2.4 million in curb, gutter, sidewalk and stormwater improvements, utility infrastructure, environmental remediation, public parking and public art, according to a URA agreement signed in 2019 with the Pueblo-based developer of a Hyatt Hotel west of the auditorium.

The URA developer is Nor’wood Development, which also serves as master developer for the Southwest Downtown URA on the opposite end of downtown where the Olympic & Paralympic Museum and Hall of Fame and Weidner Field are located.

Besides the hotel, the URA plan envisions office, residential and retail development for the remainder of the block, according to URA documents.

URA Executive Director Jariah Walker says he doesn’t have a deep understanding of the Community Cultural Collective plan, so he couldn’t predict whether the project would generate TIF money, and if so, how much. The Hyatt next door is expected to raise $1.5 million in TIF.

A 2005 urban renewal plan for the block predicted redevelopment would result in $3.8 million in sales tax revenue for the county and $7.3 million for the city over 25 years. The URA was established in 2004 and runs through 2029, though nothing much happened until the last two years. If a bond issue to fund development is imagined, with repayment of the debt through TIF, the URA designation would have to be extended.

Backers of the auditorium project want money from the county and city from their $140 million and $76 million allocations, respectively, from the American Rescue Plan, as well as from the state and, potentially, the National Endowment for the Humanities and other national organizations.

A pro forma capital and operating budget shared with county commissioners shows construction would cost $52.9 million, with $3.6 million of that set aside as a contingency. Revenue is stated as $56.5 million, which includes donation of the building by the city, with a value of $2.265 million. Weise said tax credits and other sources of funding would only be available if the facility is in the hands of a nonprofit agency, rather than the city.

The auditorium would open in the fall of 2024. For its first full year of “stable” operations, projected to be 2026, the pro forma shows operating expenses at $4.2 million and revenue at $4.5 million, for a net of $314,000. The revenue total that year would include $250,000 in support from the city. There’s no mention of whether city subsidies would be needed leading up to 2026.

Clearly, backers want the government to play a major role. David Lord, the new nonprofit’s board chair, told commissioners, “Philanthropy doesn’t want to pay for this 100 percent. They say, ‘Where is the government sponsorship?’”

That gives you a lot of opportunity for revenue streams....

He said for the project to move forward, it needs money to pay Semple Brown, Architecture & Interior Design, and GE Johnson Construction, listed with others as project partners.

“We’re really at a moment ... if we miss this opportunity in the next few months, the project will not be moving forward,” Lord said.

Weise predicted the facility would become a hub that is “activated all day.”

She also pledged that it would be accessible and affordable to community partners, with a “strong education arm.”

Referring to students, she said, “If they’re passionate about something, they will come.”

Weise also predicted the reimagined facility would position the city to draw cultural conferences that now go elsewhere, and it would spur further downtown residential and commercial development.

“We will help keep cultural spending within the county,” she said.

By planning for multiple venues, he said, “That gives you a lot of opportunity for revenue streams, because in the end, if there’s not a good business model, things like this just don’t work.

“Ultimately,” he added, “this property being owned by a nonprofit, from my point of view, makes an enormous amount of sense. It allows it to have a lot of bend and flexibility in revenue streams.”

Walker, with the Urban Renewal Authority, voiced a note of skepticism but also hopes that it’s successful.

“Right now that building is needing a huge influx of help, one way or another,” Walker tells the Indy. “My only concern is, will that level of money be raised to put forward all the improvements it needs and deserves, and what sales tax will be generated? My concern is, is that too big of an apple to take a bite out of right now?”

But he adds, “I’m a fan. I certainly think the City Auditorium, a gorgeous building, deserves something.”

Asked to comment on the proposal, Mayor John Suthers through spokesperson Jamie Fabos said, “It’s very early, so we won’t have much to give you.”

Kim King, recreation and administration manager in the Parks, Recreation and Cultural Services department, was equally circumspect in a statement issued through a spokesperson.

“The proposal ... is a way to bring life back into the City Auditorium, a building that has been at the heart of downtown serving residents for nearly 100 years, and we appreciate their enthusiasm,” she said. “We are still in the very early stages of the process and further due diligence and research needs to take place to determine the feasibility of the proposed future use of the building.”

The city hasn’t disposed of a similar asset in recent memory.

When the city decided in 2012 to lease Memorial Hospital to UCHealth for 40 years, Council referred the measure to a special-election ballot, and it passed with 82 percent approval.

While the city was sharply criticized for trading 189-acre Strawberry Fields open space to The Broadmoor in 2016 without a vote of the people, a ballot measure adopted by voters last year requires the city to consult voters in the future before disposing of parkland. But that doesn’t include buildings, even if they fall under the control of the Parks Department, as City Auditorium does.

That said, the city’s real estate manual allows City Council to transfer property to an individual or organization “for the purpose of facilitating a Project that would be a Community Benefit.”

Council must deem the property as surplus, obtain an appraisal, determine at what value the property would be transferred and decide the conditions of that transfer.

If it’s worth more than $20,000, the city must advertise the availability of the property and receive applications from anyone who could provide the desired community benefit. The “controlling department,” in this case Parks, would decide which applicant is most capable of achieving the community benefit.

“The contract for sale and/or the deed should contain appropriate terms to restrict the use of the property to the intended Community Benefit for a reasonable term of years, given the circumstances,” the real estate manual says.

The El Paso County Assessor’s Office values City Auditorium at nearly $2.5 million, but $1 million of that is the acre of land upon which it sits.