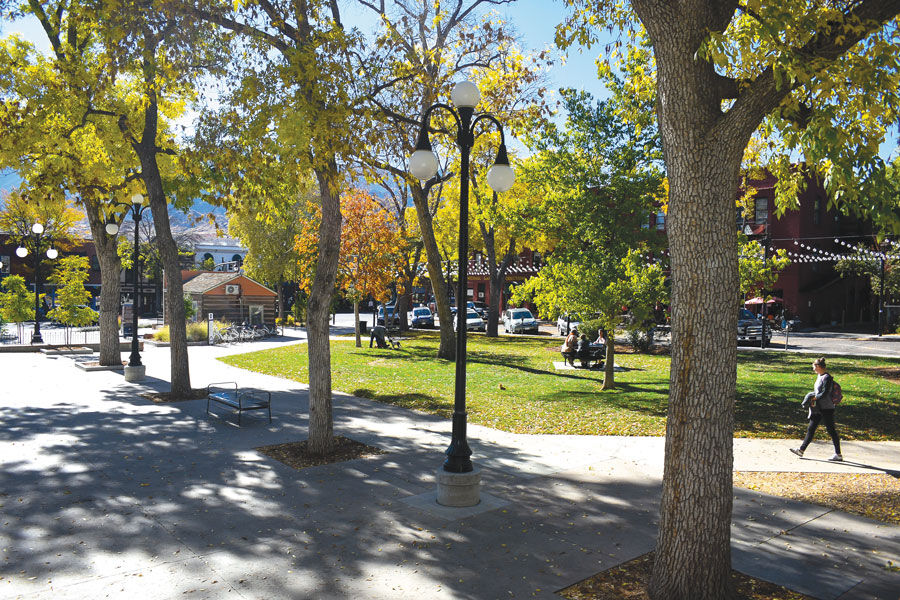 Bright white concrete covers a good portion of Bancroft Park on the Westside after the park was reworked in 2020. 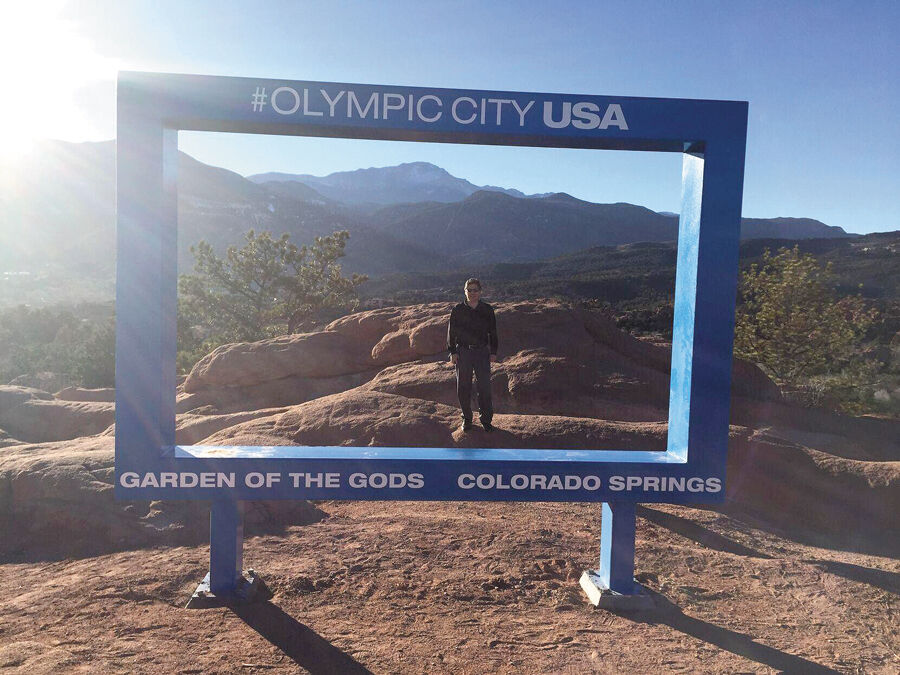 Installation of a big blue frame in Garden of the Gods Park drew public criticism.

A group tagged Cheyenne Central is soliciting funds for a “vote no” campaign against the Trails, Open Space and Parks measure, which will appear on the Nov. 2 ballot. The measure, 2C, would double the TOPS tax from .01 of a percent to .02 of a percent — increasing it from 1 cent on a $10 purchase to 2 cents.

If passed, the measure would reduce the percentage allocation to open space and allot 30 percent to maintenance of open space, trails and parks and administration.

“If you don’t want giant, blue advertisements bolted into our precious parklands, a repeat of Strawberry Fields, or spending $330,000 on a self-cleaning bathroom and concreting our parks making them commercial plazas, please consider donating so we can purchase materials to get the word out as to why 2C is fundamentally flawed,” a recent email from Cheyenne Central said.

The “giant, blue advertisements” is a reference to a large metal picture frame drilled into rock at Garden of the Gods in 2017 the behest of the Olympic City USA Task Force, of which the mayor’s wife, Janet, was a member. It was removed just a few days later, after public outcry.

The self-cleaning bathrooms were installed at Bancroft Park, much of which was paved over to create a marketing space, which some residents disliked.

All of those things have caused some residents to lose trust in the Parks Department, the Cheyenne Central fundraising email says.

We care deeply about our parks and find this to be a very disturbing approach....

In 2003, voters extended the tax through December 2025. The measure limited maintenance for TOPS-funded trails, open space and parks to 6 percent of the total collected; no more than 3 percent could be used on program management. The remainder was to be split 60-20-20 as designated by the original measure.

In 2010, the city asked voters to modify the allocation by allowing up to 15 percent to be used for maintenance of parks, trails and open space during 2011 and 2012, and voters approved.

Finally, in 2013, the city asked voters for the 20 percent set-aside for acquisition and construction of parks to be used not only for acquisition, construction and maintenance of new park areas, but also to maintain and renovate existing parks within the city. They approved.

The “vote yes” campaign had raised $147,000 as of the Oct. 1 campaign finance report, with most of the money coming from developers, construction companies, police and fire organizations and philanthropists. The campaign has sent out at least one mailer to voters, saying, “2C will provide critical funding to acquire and preserve new open space projects, fund and maintain our beautiful parks and world renowned trails.”

Citing a city-funded analysis that found about $270 million in backlogged parks projects, the Parks Department expressed a desire to see more of the TOPS money channeled toward developing parks, rather than buying open space. The city has not conducted a similar analysis of what open space acquisitions are needed and at what cost.

The “vote no” email notes that many Cheyenne Central supporters worked hard to create and protect open space. “In fact,” it says, “that’s precisely why we have taken a position against TOPS III, 2C. We care deeply about our parks and find this to be a very disturbing approach to address park funding. We shouldn’t have to rob Peter to pay Paul. We should keep the bar high in terms of our Open Space acquisition and protection as we all know from the infamous Strawberry Fields loss, once you lose it, it’s gone forever.”

Strawberry Fields is a 189-acre open space in North Cheyenne Cañon which the city traded to The Broadmoor for a collection of mountainous lands and trail segments in 2016. A group of citizens opposing the trade took the city to court but lost.

Cheyenne Central appears to be a loose-knit group of residents with the common cause of opposing the ballot measure. Dana Duggan, a Westside activist who opposed the Strawberry Fields land swap and backs the Westside Watch movement to encourage more evacuation planning, is one of those working on the campaign.

“We are up against big donations from the developer community — $140,000 as of the last filing and counting. It’s a little curious why there’s so much support pouring in from that group. So, we need all the help we can get,” she says via email. “We have been bootstrapping it and not focused on fundraising given the incredibly tight timeline we have ....”

She says the group has filed with the city clerk as a small scale issue committee. It won’t file a campaign finance report unless it spends $5,001 or more.

Duggan also describes the group as “a nonprofit organization with a focus on news and resources geared toward preserving and protecting the character and community of the Cheyenne area.”

Other longtime open space supporters who share the committee’s skepticism of 2C say the pitch from “vote yes” advocates is misleading.

City Council President Pro Tem Richard Skorman, who was part of the original TOPS effort in the 1990s, argues that increasing the tax from about $11 million to $22 million per year will actually provide more money for open space.

Since the measure also exempts the tax from Taxpayer’s Bill of Rights revenue caps, that amount is likely to grow significantly during the TOPS tax’s life, he notes.

“This would make it bigger in the future,” he says by phone.

But that assertion isn’t true, says Linda Hodges, who served on the TOPS Working Committee for seven years.

She says via email the current TOPS allotment gives 55 percent, or $5.5 million, to open space, after 9 percent is taken off the top for administration and maintenance of parks, trails and open space, assuming the tax generates $10 million a year.

2C’s formula would dedicate only $4.2 million of the new $20 million total per year to open space, given that 30 percent is first taken off the top for maintenance and administration.

“The new TOPS does cut open space acquisition money — plain and simple,” he says in an email. “Proponents have been doing a pretty good job of trying to spin this ... but the bottom line is that the new TOPS cuts the open space category by 24 percent — even though the tax rate doubles.”

Sue Spengler, as a longtime open space supporter, opposes it for a slightly different reason.

Skorman says should 2C be approved on Nov. 2, the city will conduct an open space master plan. “We’re really going to assess open space, because the original was drafted in 1994” and hasn’t been updated since.

“It’s vital that we really look at what’s out there [that] we weren’t thinking about,” he says.

He says the city didn’t want to wait for the study before proposing renewal and increasing TOPS, because it’s unknown what other measures it would compete with at a future election, and parks maintenance and development need help now.