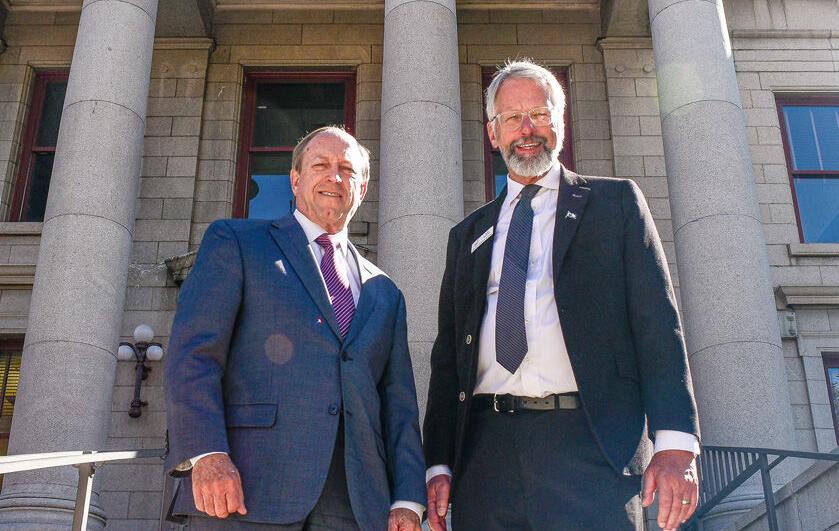 Mayor John Suthers (left) and Council President Tom Strand have an agenda to carry out before leaving office in 2023. 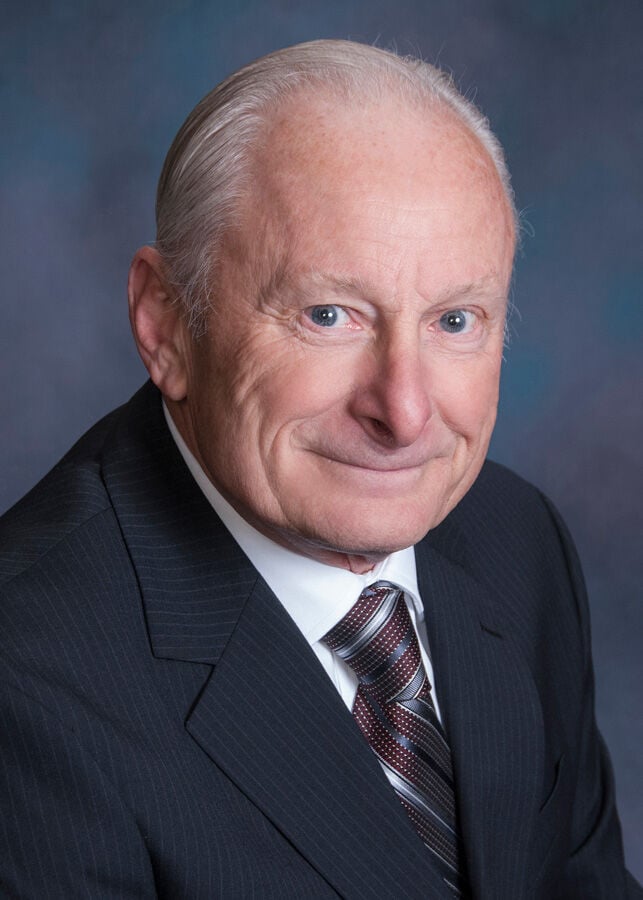 If you had 18 months as a key figure in city government, how would you use that time to assure you’d left your mark? That’s the question we put to three officials in Colorado Springs who, elected in 2015 and having all been re-elected in 2019, will leave office in spring 2023 and are barred by term limits from seeking additional terms.

While one year is an eternity in politics, it can whiz by at lightning speed.

So we asked Mayor John Suthers, Council President Tom Strand and at-large Councilor Bill Murray to share their thoughts as they contemplate their final months in office.

By way of background, Suthers proposed a parade of ballot measures during his first six years in office that together will generate nearly $1 billion in 20 years for roads, bridges, drainage control and parks. Those measures:

• November 2015: Retain and spend $2.1 million in excess revenue collected above caps imposed by the Taxpayer’s Bill of Rights (TABOR) for park trails improvements.

• November 2019: Extend the roads tax for another five years, projecting revenue at $275 million.

Suthers is also on board supporting two additional measures on the Nov. 2 ballot — a 20-year extension of the Trails, Open Space and Parks tax that would give the city at least $400 million, and a measure to retain $20 million in excess TABOR money to spend on fire mitigation, mostly on the city’s western border.

That brings the grand total of revenue measures proposed or supported by Suthers to $1.3 billion.

Strand also backed those measures. Murray supported all but the stormwater fees, which he opposed because he “felt developers, who benefited from the city’s failure to enforce the standards needed to pony up to the bar.”

Following are their written and unedited responses to three questions about the time remaining in their terms.

John Suthers: “I will spend my remaining tenure as Mayor of Colorado Springs pursuing the same objectives I’ve pursued since my election as mayor. Collaborating with City Council, I will pursue excellence in municipal service delivery to our residents, continue to improve and expand critical public infrastructure and facilitate new job creation. We’ve made tremendous strides in improving and expanding transportation and stormwater infrastructure. Hopefully the voters will allow us to make similar progress in improving and expanding parks, trails and open space to meet future needs.

“My goal is to leave office having rectified the systemic revenue issues that caused Colorado Springs to fall behind in its ability to deliver critical public services and infrastructure, while still ensuring that city residents have one of the smallest per capita tax burdens in the country.”

What is the biggest challenge the city faces that you don’t foresee will be dealt with during your service with the city? Explain why it can’t be dealt with in that time, and what your recommendations are for dealing with it in the future.

“Ensuring that critical public services and infrastructure keep up with the growth of the city will be an ongoing challenge. I hope that city government in Colorado Springs will remain focused on essential municipal services including police and fire, transportation, public works and parks and will not try to solve problems that are not within the traditional and appropriate purview of city government. When cities get distracted from these core missions, city services and resident satisfaction suffer.”

“I hope all of my future endeavors after I leave the Mayor’s Office will involve serving the public, even if they do not involve elected or appointed office.”

I will pursue excellence in municipal service delivery to our residents...

• Discontinue any puppies imported from outside the State of Colorado from “possible Puppy Mills” and sold from Colorado Springs pet stores.

• Pursue an increased Lodgers and Automobile Rental Tax on the ballot and get it approved providing 4 percent lodging tax and 2 percent rental car tax. [Those rates are now 2 percent and 1 percent, respectively.]

What is the biggest challenge the city faces that you don’t foresee will be dealt with during your service with the city? Explain why it can’t be dealt with in that time, and what your recommendations are for dealing with in the future.

• Increase in Council stipend or compensation to attract younger and more diverse candidates and elected officials. Goal would be more than $ 50K [a year]. [Councilors currently are paid $6,250 per year.]

• Additional sworn personnel in our public safety staff and positions in CSPD, CSFD, and the Emergency Management Office.

• Discontinued use of coal at Nixon Power Plant and reduced use of carbon fuels such as natural gas, and greater reliability on renewable energy sources.

“My future public service or engagement plans are yet to be determined and are undecided. They will depend on family, personal health and energy levels. I have currently served 30 years military active duty, 5 years on the District 11 School Board, 8 years on the CILA Charter School Board, 6½ years on CS City Council and CSU Utilities Board. I have been fortunate to have been peer chosen as Chair and Vice Chair of Utilities, and President Pro Tem and President of the CS City Council.

“Accomplishments that I’m proud of:

• The creation and voter approval of 2C and 2C2 to fix, repair and rehabilitate hundreds of miles of City roads, curbs and gutters (fill pot holes) and build ADA ramps.

• The reestablishment of the Stormwater fee (added to our CSU utilities bill) to settle Federal Lawsuit and prevent local flooding and water erosion and pollution to communities and cities south of Colorado Springs.

• The realization and fruition of the almost complete package of the City [for] Champions Projects, including: The Olympic and Paralympic Museum, Weidner Field Soccer Stadium and Event Center, The Colorado College Robson Arena, The Hybl Sports & Performance Center, and with the U.S. Air Force Visitors Center to come in 2022. Hooray!!”

Bill Murray: “My specific goals for the time remaining in office begins with this November’s ballot issues. Please approve the TOPS initiative (because it will benefit our parks substantially) and the TABOR retention issue (which allows for these monies to be used for fire mitigation).

“I will attempt, as I have in the last 6 years, to argue for a less costly but faster internet connection for everyone in the City. It has become the utility that our citizens need, and businesses want. It will help power our city’s productivity well into the future.

“Other goals include asking the city to provide a bond that would allow for Shooks Run to be finished in less than 50 years. It would have an immense impact on the quality of life along its boundaries and will provide a fresh view of our city. Also, I am not a fan of our current direction with tourism. I would rather solicit firms to locate here because of our lifestyle and work force. We cannot sustain our rate of growth with just fulfillment centers and tourism.”

What is the biggest challenge the city faces that you don’t foresee will be dealt with during your service with the city? Explain why it can’t be dealt with in that time, and what your recommendations are for dealing with in the future.

“Let’s talk about unsustainable growth and its effects on our lifestyle, changing demographics, affordable housing, the 75% of the population that did not vote in the last election, and police accountability. Let’s talk realistically about taxes. In the end, actions will always speak louder than words. We have a lot of work to do, and the train is moving. Time is not our friend, and our city and Council are risk adverse when we discuss any realignment of taxes. Balance is key and no program is perfect to include TABOR.

“I would request our developers, who have benefited greatly from the Council’s decisions, consider greater philanthropic endeavors as their profits increase. In addition, we should reduce our reliance on Metro Districts as they are accelerating our build-out without a comparative increase in resources to support the needs of our city.

“What does it realistically cost to run this city? A balanced budget does not mean the City has all the resources it needs to operate in a safe and productive manner. Our income is based largely on sales taxes, which ebb and flow with the economy, but the City must still provide the necessary services anyway. Other more consistent forms of revenue are required.

“All accomplishments on my watch were done as a team sport and credit is given to the team, without political interest and for the benefit of all Colorado Springs citizens.”

“My public service ends upon completion of my term. I want to thank everyone who has had faith in me for the last 8 years. In the meantime, I will continue to ask the hard questions, hold the City’s feet to the fire, ask for data via dashboards, and vote my conscience in the best interests of everyone. Please never miss an opportunity to vote informed and consider running for public office.”