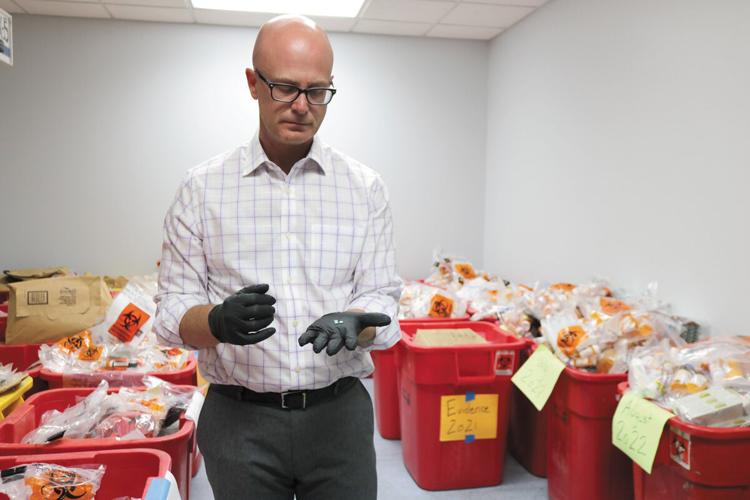 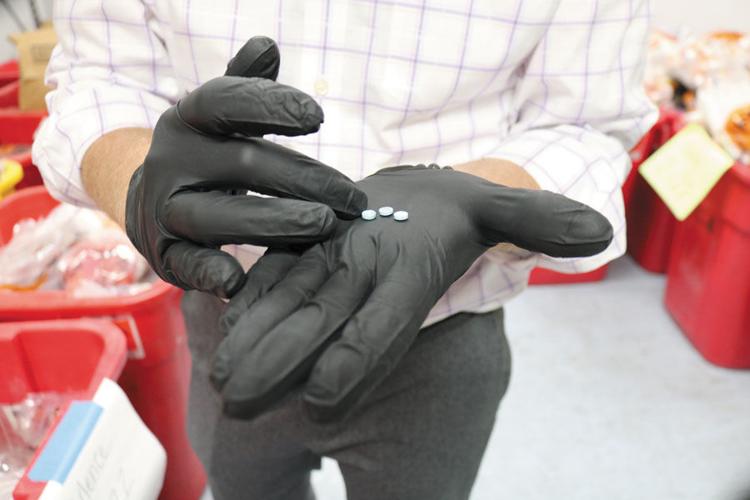 Touching pills with fentanyl in them cannot cause an opioid overdose, Kelly says. 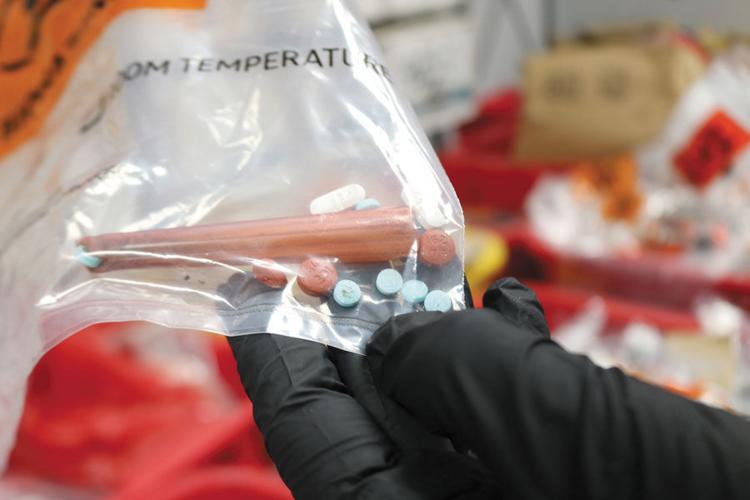 The blue pills containing fentanyl are made to look like 30 milligram Oxycontin.

A fountain police Department DUI enforcement officer was helping Colorado State Patrol respond to a crash on Interstate 25 on July 28 when he opened a bag of fentanyl pills from one of the involved vehicles.

Soon after confirming with other officers that the substance was fentanyl — the powerful opioid commonly trafficked as an illicit pill — the Fountain officer lost consciousness, was transported to the hospital and twice administered Narcan, an opioid overdose reversal drug, says FPD’s Commander Mark Cristiani, recalling official reports from the scene that day.

There’s a problem with this story, although it’s one heard repeatedly by law enforcement officials whose personnel encounter fentanyl during routine traffic stops or searches. The consensus among toxicology experts is that it’s highly unlikely for emergency responders to overdose from simply being in the vicinity of, or even touching, narcotics containing high levels of fentanyl.

The American College of Medical Toxicology, American Academy of Clinical Toxicology and other individual experts have been trying to correct the record on police fentanyl exposures for at least five years, publishing reports about the “extremely low” risk of harm from exposure for emergency responders in these types of situations.

In his role as El Paso County Coroner Dr. Leon Kelly runs a toxicology lab to determine whether deaths were caused by drugs or other substances. He explains the effects of exposure to fentanyl in pill form (the way the drug is now most commonly trafficked in the region): “Unless you ingest it, usually orally, you’re not going to suffer any consequences.”

“Just by touching a pill, it’s not going to magically, instantaneously absorb into your skin and cause [an overdose],” Kelly tells the Indy. “It’s not aerosolized; it’s not in the air that we breathe; it’s not coming into your body.

“In the absence of either a liquid form that can be absorbed through the skin, or large amounts of a powder form that could be inhaled, there’s really no concern for first responders, law enforcement, as long as they’re following appropriate standard personal protection,” he says.

Still, there’s a prevailing anxiety that being “exposed” or “just being in the presence of the drug” is dangerous, Kelly says. Fentanyl “needs to be treated essentially like a potentially dangerous compound,” he adds, “but not one that is immediately life-threatening upon simply seeing it.”

The Fountain officer transported to the hospital for a possible exposure was even told by the emergency room doctor who treated him that he was, in fact, not suffering a fentanyl overdose, Cristiani says. Yet, more than a month later, the officer still believes he was exposed.

“He, in his mind, said he was exposed,” Cristiani says. “Was it a true exposure or was it [not]? It was really hard to tell.”

Within local law enforcement agencies, there’s a gap between reality and this anxiety about fentanyl, in part because of strange experiences like these.

Leaders in the Fountain and Monument police departments — both of which reported officers were hospitalized for potential exposures to fentanyl this past summer — said their officers fell unconscious after finding or examining powders and pills.

Cristiani says it’s still up in the air whether the July 28 incident, FPD’s first, was a “true exposure.” It’s possible the officer “got upset that he was near fentanyl and it affected him mentally,” he says.

“Was it a true exposure or was it [not]? It was really hard to tell.” -- Cmmdr. Mark Cristiani

“I can tell you there was some debate amongst the medical staff that helped him — the paramedics and the police — whether it was a true exposure or not,” Cristiani tells the Indy.

And tests of the officers, their equipment and of the substances themselves after these incidents haven’t brought any clarity, police department officials say. In fact, it’s just the opposite — the Fountain and Manitou departments report mixed test results for opioids in different samples, which further fuels their uncertainty and anxiety about close encounters.

They’ve gotten, for example, contradictory test results for opioids detected at the crime scenes or on the equipment of the hospitalized officers, versus what was detected in their bodies or determined from their symptoms.

After a Monument Police officer lost consciousness during an Aug. 11 traffic stop where he discovered and opened a container with an unknown powder, no traces of an opioid were found in his blood, Police Chief Sean Hemingway tells the Indy. Monument Police Department is still waiting for test results of the substance itself from the Colorado Bureau of Investigation’s toxicology lab, as officers did not perform a field test at the scene, Hemingway says.

Although the officer’s blood tested negative for opioids in that case, the commander on scene reported that the officer displayed symptoms of an opioid overdose, Hemingway says.

Equally confusing was a suspected fentanyl exposure incident in the department back in 2021, the first Hemingway recalls during his three-year tenure as Monument’s police chief. The officer in that case “merely opened” a vial with an unknown liquid and was hospitalized with overdose symptoms, he says.

While a blood test of that officer returned a positive result for opioids, the liquid itself was negative, according to the department.

The suspected exposure incidents — and a third that occurred earlier this year in Monument — have made Hemingway “cautious with absolutes” and reluctant to say his officers were experiencing a “placebo effect” when encountering the substances.

“Some of the medical research is great, which really makes me want to believe the placebo effect,” he says. “But then when I look at our three specific scenarios, they don’t all make sense.”

Cristiani echoes this sentiment — he says the Fountain Police Department doesn’t want to “underestimate the potential effects” of a fentanyl exposure or tell officers they absolutely can’t be exposed while out in the field.

“We hate to tell our officers, ‘You can’t get exposed ever,’ because that’s probably not true,” Cristiani says. “There’s always a circumstance where you can’t say 100 percent for anything.”

It’s also hard to know exactly how much fentanyl is in a single pill or container of powder, because of how it is manufactured, Dr. Kelly says. Locally, it’s most often being found in a solid pill form, sometimes made to look exactly like prescribed opioids, and this is “predominantly” the form law enforcement officials are encountering, he says.

But there’s no telling how much fentanyl could be in any given pill, which is one explanation for the heightened concern of exposure among law enforcement officials, Kelly explains. Very small amounts of fentanyl — just 2 milligrams, according to the Drug Enforcement Administration — can be lethal, and because the pills aren’t manufactured by a pharmaceutical company, “some of them may have highly lethal amounts of fentanyl,” Kelly says.

“So when you encounter it, you don’t have any idea, one, that it may be fentanyl, or two, how much fentanyl is in there,” he says, adding as a caveat that a person would still need to ingest the pill in order to overdose, no matter how much fentanyl may be in it.

Kelly himself, equipped with the black nitrile gloves that the National Institute for Occupational Safety and Health recommends first responders use when handling illicit drugs, pulled out more than one evidence bag kept at the county coroner’s office containing the pills. The office collects small amounts of drugs found at the scenes of deaths for testing, to help identify whether the deceased died of an overdose, Kelly says.

The small, blue pills are stamped with an “M” on one side and “30” on the other to make the fentanyl look indistinguishable from 30 milligram Oxycontin pills, Kelly explains, turning them over with his gloved pinky. He comments that “it took me all of 20 seconds” to find a bag containing the pills in a deep container of evidence, because of how common they’ve become.

The number of fentanyl deaths in El Paso County has doubled or more than doubled every year since 2017, Kelly reports. About halfway through 2022, the county had about 60 fentanyl deaths, “tracking well ahead of last year,” he says.

“It’s so pervasive now, that it’s spilled into every neighborhood, every community and now every demographic,” Kelly says. “And that’s when it gets scary for most folks.”

He doesn’t blame law enforcement for being overly cautious about their officers’ exposure to the drug, even if some of that caution is misplaced, based on the known ways fentanyl can enter the body.

“The drug is so potent, and we all know that,” Kelly says. “The fears are not completely without reason or basis.”

Cristiani, of the Fountain Police Department, said there are protocols that officers follow when they suspect fentanyl is at the scene of a search — put on those nitrile gloves and a surgical mask before inspecting any unknown substance. He says the department is using the July incident as a “training opportunity” to emphasize that officers should be gloving and masking up before opening bags of unknown substances in the field.

When asked if FPD assures its officers that it’s highly unlikely for them to overdose from touching fentanyl, Cristiani says “we’re careful when we say things like that.” They’d rather be more cautious than let down their guard based on the research that is out there, he explains.

Monument Police Department, for its part, is putting together a committee of department personnel to look at its process for field testing unknown drugs, Chief Hemingway says. Usually officers will do the field tests (although one wasn’t done during the Aug. 11 incident, because the officer began to feel ill before), but the department is looking at ways to reduce potential exposures to fentanyl, he says.

They’re looking at questions like, in what instances is a field test necessary to arrest someone at the scene? Or can the illicit substances be packaged and sent to a lab for testing, and an arrest warrant issued later? After three officers in his department were hospitalized over the last 18 months, Hemingway says it has “sparked a new interest” to look deeper into the issue and scientific research around it.

“We don’t want to create hype, where we’re saying, ‘Every time a cop stops a car with drugs, … it puts [their] life in danger,’” Hemingway says. “I’m not looking to do that. I’m not looking for a scare tactic.

“But I think there’s more data that needs to be captured,” he adds.