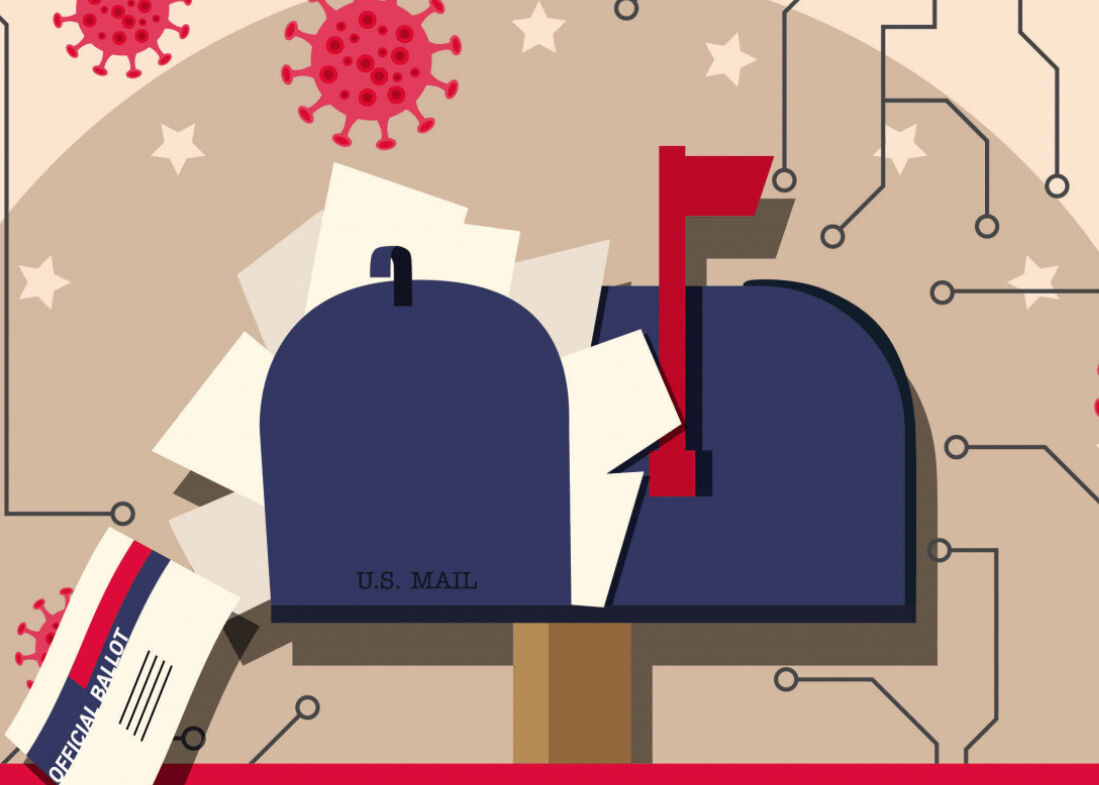 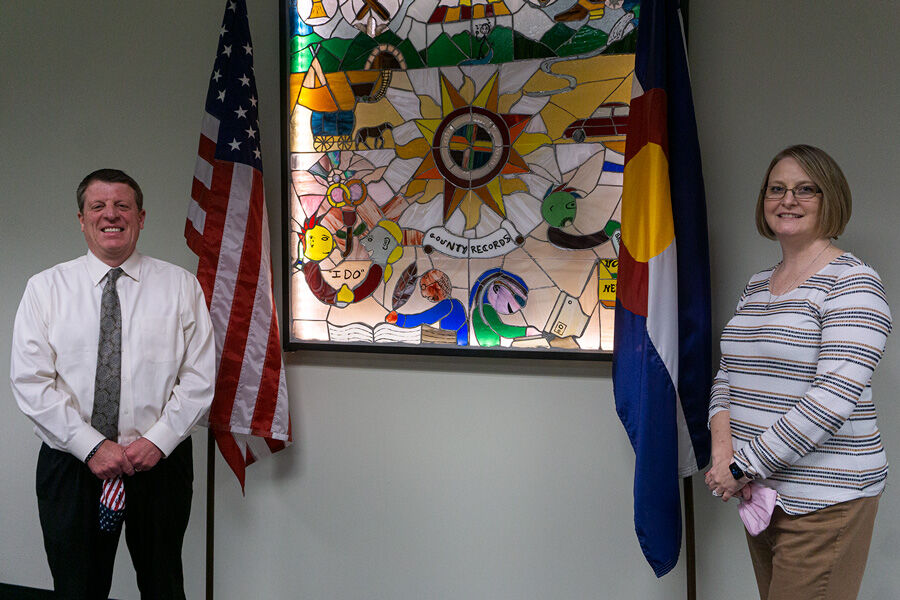 Chuck Broerman, El Paso County Clerk and Recorder, and Angie Leath, director of elections for the county. Both say voting by mail is secure.

Judith Rice-Jones isn't worried about casting her ballot by mail in the Nov. 3 election.

Despite warnings by President Donald Trump and his backers that mail balloting encourages fraud, Rice-Jones feels comfortable placing her ballot in the mail slot.

On the Nov. 3 ballot

For the first time in nearly two decades, Marguerite Terze won’t be working as an election judge in November’s election. She and her husband M…

But, she’ll do it in plenty of time to assure it’s delivered to the El Paso County Clerk and Recorder’s Office by the 7 p.m. Election Day deadline.

But facing a congressional committee inquiry because of those actions, DeJoy suspended all of his orders Aug. 18, which he said were designed to cut costs, until after the Nov. 3 election. He refused, however, to have the mail sorting machines returned to operation.

It’s unclear whether DeJoy’s reversal includes a proposal to jack up costs for election officials to mail out ballots, from 20 cents per ballot to 55 cents. If adopted in time for the Nov. 3 election, the change would add more than $145,000 to the cost of the election in El Paso County alone. Ballots go out Oct. 9.

But El Paso County Clerk and Recorder Chuck Broerman isn’t concerned. First, he says he hasn’t heard about the potential increase, and second, county commissioners have always allocated whatever is necessary for elections, because they view elections as one of the chief responsibilities of the county.

“County commissioners have given 100 percent support,” he says.

In fact, Broerman says Colorado’s long history of voting by mail means all the components are time-tested for detecting fraud and shielding against cyber attacks.

Locally, the Indy was able to identify only a few cases in which charges were filed against someone for voter fraud since 2015. During that five-year span, literally millions of votes were cast.

“I am extremely confident and proud of what we’ve done locally and statewide,” Broerman, a Republican, says. “The biggest challenge we have is people on YouTube and other folks who want to spread news that is not correct.

“We do everything we can to make sure that votes count while keeping out fraudulent ones,” he says. “We’ve had a lot of practice.”

That’s not true of some other states, however, and the crunch of trying to mount a mail-ballot election within a few months due to the COVID-19 pandemic could lead to chaos and mistrust, he says.

“The concern is we took a dozen or more years to get there,” he says of Colorado, “and because of COVID, people [in other states] are moving very quickly in a short period of time to get there. Are all the necessary safeguards in place? An election is a sophisticated thing. It’s hundreds of activities that are daisy-chained together.”

Colorado has held some form of mail-balloting since 2013, Broerman says. Before that, voters went to polling places, although a significant number of voters still cast ballots by mail via absentee ballots. (Trump has voted several times by absentee ballot.)

Since then, mail balloting has grown in popularity, although county election officials still offer voting sites to enable citizens to cast ballots in person on Election Day if they choose. In recent years, though, up to 98 percent of voters in El Paso County vote by mail, he says.

With the expansion of voting by mail came systems designed to guard against fraud while also taking steps to make voting easy.

For example, anyone who obtains a driver’s license in Colorado is automatically registered to vote under Senate Bill 235, adopted in 2019.

Another measure to ease voting allows voters to cast ballots at any voting center, even those far from their homes. This year, there will be 35 voting centers.

In addition, the county has upped the number of voter drop boxes from nine or 10 a decade ago to 35 this year. That means there are 70 locations across the county where people can drop off their ballots.

Although the prevalence of drop boxes will better accommodate voting amid the pandemic by making every resident within a few minutes of a box, the virus wasn’t the motivator, Broerman says. Rather, his office and others across the state are trying to make voting as simple as possible.

He did note that voting centers will be equipped with sanitizer and plastic shields for staff to guard against the virus’ spread.

National Public Radio reports the Republican National Committee and the Trump campaign have tried to block Pennsylvania from using drop boxes in November, claiming they can increase fraud.

We strongly encourage you to use drop boxes.

“Drop boxes are sturdy, metallic, weather-resistant, and are bolted to the ground,” the release said. (NPR reports a manufacturer says the most popular model weighs 600 pounds.) “Colorado law also requires that all drop boxes be kept under 24-hour video surveillance with adequate lighting in order to be able to easily detect potential tampering. When drop boxes are emptied, they are done so at least every 24 hours by a team of bipartisan election judges who must maintain a detailed chain of custody log when transporting ballots between drop boxes and the central counting facility to ensure no ballots are removed or added.”

“Every eligible voter receives a ballot in the mail, coded in our statewide system,” she says. Voters who “spoil” their ballots by marking the wrong candidate, or who misplace their ballot, can call the elections office and receive a second ballot. Meantime, the first ballot is voided, Leath says.

If a voter finds the first ballot that was lost and votes it, the second ballot is voided. “The system will not accept both ballots,” Leath says. Because the voter system is statewide, someone cannot vote a ballot in Pitkin County and also in El Paso County, for example, she says.

As for signature verification, ballots go through three layers of scrutiny.

If the machine kicks out a signature as suspect, then an election worker will study the signature. If they can’t make a complete match, the signature undergoes review by a bipartisan team that compares the signature to all other signatures submitted to the Clerk and Recorder’s Office.

If the ballot is refused for signature reasons, lack of identification or some other discrepancy, the election office sends the voter a “cure letter” notifying him or her they have eight days after the election to return a form with a copy of their ID. That signature then becomes their new signature on file, Leath says.

All those protections have helped officials nab a handful of cheats since 2015.

“Sometimes criminals are not the brightest,” Broerman says.

For example, one woman pleaded guilty to voting twice in casting her and another citizen’s ballot in the November 2016 general election. The citizen had died four years earlier.

Charges related to voter fraud include forgery, which is a felony, and voting twice in an election, a misdemeanor.

Most of those convicted were given deferred sentences, paid a fine and had to perform community service.

Since 2015, 11 people have been charged with voter fraud in El Paso County, according to the 4th Judicial District Attorney’s Office. Five cases remain pending.

In the last presidential election in 2016, the Clerk’s Office referred 2,031 ballots, or less than 1 percent, to the DA’s Office for investigation. Suspicions focused on signature discrepancies and voting twice. As a result, four people were charged and later pleaded guilty to voter fraud allegations. That comprises less than .002 percent of the 218,000 ballots cast in that election.

It’s worth noting that May says while the DA’s Office usually gets “hundreds” of questionable cases referred after each major election as suspicious, most can be easily explained, such as someone broke their hand and tried to sign with their non-dominant hand, making the signature not match the one on record, or a husband and wife signed one another’s ballots by accident, or voters didn’t respond to Clerk’s Office letters asking them about a suspicious signature, because they thought it was junk mail. If people don’t respond, those votes aren’t counted.

Also, if a signature is suspect, the voter is sent a letter with instructions of how to “cure” the problem and still have their vote count, Broerman says.

But at the end of the day, actual fraud is rare.

Nevertheless, Trump said in mid-August he wouldn’t approve $25 billion in emergency funding for the United States Postal Service to accommodate mail balloting amid the coronavirus pandemic, because expanding mail voting would perpetuate “one of the greatest frauds in history,” according to The Washington Post.

His assertions prompted Griswold to issue another statement, calling Trump’s move “voter suppression” that would “undermine the safest method to vote during a pandemic, and force Americans to risk their lives to vote.”

Broerman dismisses the idea that the Postal Service would sabotage the election, at least in Colorado.

“We work closely with the Postal Service locally, but it takes that constant relationship with them,” he says. “The mail system is a single point of failure, so we work hard to make sure on the front end that everyone gets their ballot.”

That said, Broerman has some advice to make sure your vote is counted.

First, while you can mail it back, “We strongly encourage you to use drop boxes.” Don’t mail your ballot within eights days of the election. Colorado’s laws require ballots to arrive at election offices by 7 p.m. Election Day. Postmarks play no role.

Broerman notes local mail is routed to Denver for sorting before it’s returned here, so there’s always a chance that mail won’t make it to his office on time.

Second, if you do mail your ballot, make sure to use adequate postage. Ballots have yet to be printed, Leath says, so it’s not known whether the return ballots will need one or two stamps or more.

Which brings us back to Rice-Jones, a member of the local branch of the League of Women Voters.

She points out that nationally, the League has weighed in on DeJoy’s antics, saying on its website, “What we are seeing from the postmaster general right now is nothing short of modern-day voter suppression,” which is “undermining public trust in the mail system at a critical time, less than 100 days before a major election cycle.”

The League also notes that mail balloting is relied upon by overseas service members, Americans in rural communities and people with disabilities.

Rice-Jones’ father was among those overseas service members who voted by mail while serving in Japan and Germany. Living abroad in her growing-up years, she says she came to realize not all countries allow citizens to vote a precious privilege she hopes people will honor.

“I have never missed an election,” she says. “I take it seriously.”

So despite warnings the U.S. mail could be compromised, Rice-Jones plans to vote by mail but give her ballot plenty of time to reach the election office.

“It seems like a very positive solution, and a more positive solution during the pandemic when we avoid going to places where people are gathering,” Rice-Jones says of voting by mail. “I will make very sure that I mail my ballot in plenty of time.”

If in doubt, voters can check the status of their ballot by going to govotecolorado.gov.