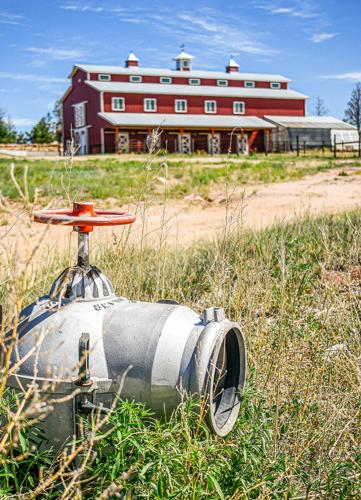 Forever chemicals were discovered in Venetucci Farm’s well water in 2016. 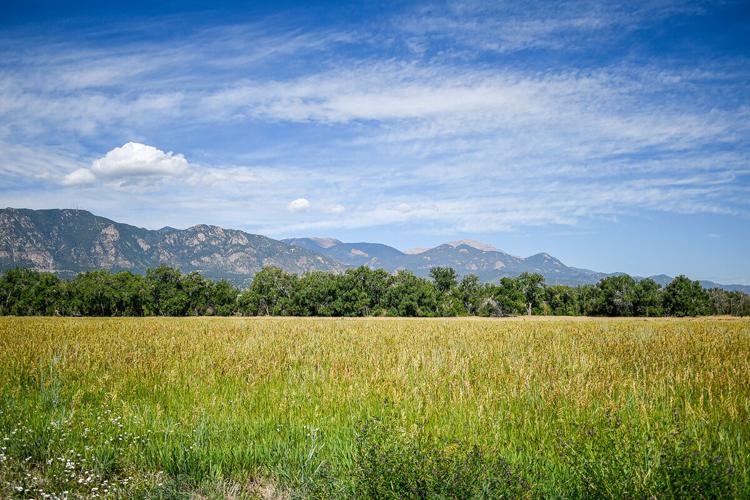 The farm used to grow pumpkins and house livestock. 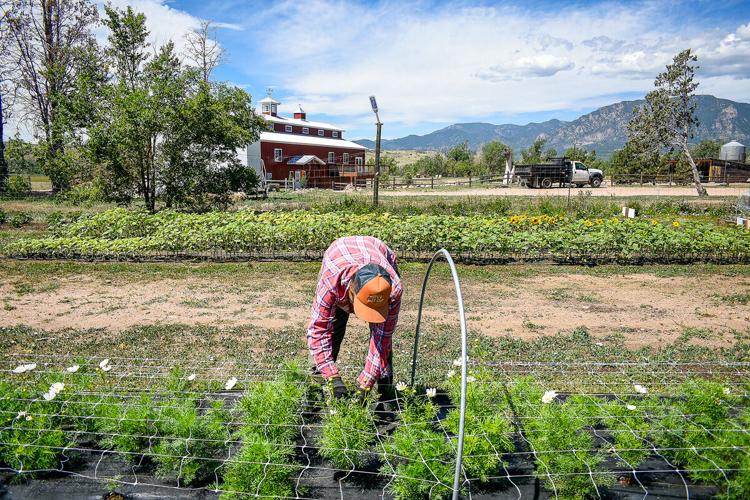 Volunteers and farmhands have helped Venetucci transition its business model. 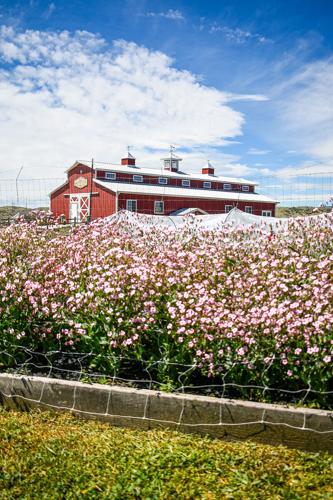 Flowers are the farm’s chief crops.

For decades, Thousands of schoolchildren in the Pikes Peak region absorbed the lesson of where food comes from during field trips to Venetucci Farm south of Colorado Springs.

There, they would be invited into the pumpkin patch to select their own gourd to take home, hopefully engendering an appreciation for the fact that food doesn’t magically appear on grocery shelves but must be nurtured from the Earth and watered for months.

But that tradition came to a halt in 2016 when PFAS were discovered in the water wells on the 200-acre farm, leading farm managers to further investigate and conclude that the contaminants transferred from the water to plant life and farm animals produced on the farm.

PFAS stands for per- and polyfluoroalkyl substances, a family of synthetic chemicals used in a variety of products. In the case of the Venetucci Farm, PFAS crept from Peterson Space Force Base (then an Air Force base) miles away, where PFAS-laced firefighting foam was disposed of on the ground, saturating pristine underground aquifers and fouling those water supplies forever.

That’s why they’re called “forever chemicals.” If you consume them, there’s no known way to shed them.

PFAS are largely unregulated, with no limits imposed by the federal government thus far and only a handful of states adopting enforceable standards, though on June 3, Colorado Gov. Jared Polis signed some of the nation’s most comprehensive PFAS legislation. The bipartisan HB22-1345, which takes effect Jan. 1, 2024, will phase out PFAS chemicals in carpets, furniture, cosmetics, juvenile products, some types of food packaging, and the fluids used including oil and gas production. It will also require any cookware with PFAS to be labeled, Earthjustice.org reported.

It remains unclear whether any amount of PFAS can be deemed safe, and some scientists believe human consumption can lead to various maladies, including cancer and low birth weight in babies. That PFAS invaded the farm, private wells and wells serving several water districts and the city of Fountain demonstrates its ubiquity. Studies and reports by environmental watchdog groups have since found PFAS across the country and around the world associated with firefighter foam and a long list of other products.

For Venetucci Farm, with a rich 100-year history as a community gem and food-producing enterprise, PFAS “permanently changed the way we used the farm going forward,” reports Sam Clark, executive director of Pikes Peak Real Estate Foundation, which operates under the auspices of the Pikes Peak Community Foundation.

The farm, though, was only one casualty. Water districts that serve thousands of people in Fountain Valley found that PFAS permeated their groundwater, too, throwing a wrench into how they served their customers.

The Environmental Protection Agency reports that:

• PFAS are widely used, long lasting chemicals, components of which break down very slowly over time.

• Because of their widespread use and their persistence in the environment, many PFAS are found in the blood of people and animals all over the world and are present at low levels in a variety of food products and in the environment.

• PFAS are found in water, air, fish, and soil around the globe.

• Scientific studies have shown that exposure to some PFAS in the environment may be linked to harmful health effects in humans and animals.

• There are thousands of PFAS chemicals, and they are found in consumer, commercial and industrial products. This makes it challenging to study and assess the potential human health and environmental risks.

For more about what’s known and not known, go to epa.gov/pfas/pfas-explained.

The Centers for Disease Control and Prevention issued a report on June 14 saying its study of 346 people from 188 households in the Widefield-Security area who consumed water before 2017 — when use of groundwater wells was suspended — showed elevated levels of two PFAS when compared to baseline national levels. Levels of some PFAS were not higher, however.

Since then, water districts in Fountain Valley have installed filtration systems or built new treatment plants that reduce PFAS to undetectable levels.

Thus, the Agency for Toxic Substances and Disease Registry, a part of the U.S. Department of Health and Human Services, “does not recommend community members who get drinking water from [districts in the Widefield and Security areas] use alternative sources of water.”

Stratmoor Hills Water District marked the completion of a $3 million water treatment facility in May, which was built in partnership with the Air Force and with a low-interest loan from the Colorado Water Resources & Power Development Authority, the district said in a release.

The treatment plant provides water “free from” PFAS, and allows the district to stop relying on water supplied by the Fountain Valley Authority, which pipes water north from Pueblo Reservoir. In the interim, the district also relied on one well fitted with filtration devices.

“This new treatment facility will utilize cartridge, ultraviolet, and ion exchange filtration to deliver up to 1 million gallons a day of clean, safe, reliable drinking water to the community of Stratmoor Hills,” the release said. “This facility will also allow the Water District to utilize its three groundwater wells year-round, only relying on the Fountain Valley Authority on an as-needed basis.”

The City of Fountain, too, discontinued using its groundwater wells in 2016 after receiving test results showing the presence of chemicals and potential contaminants in the water, says Fountain Utilities Director Dan Blankenship.

The tests showed from 70 to 80 parts per trillion of PFAS in the water, which is the level at which health advisories are required.

“The city of Fountain immediately shut off the wells, so that the water was no longer being put into the drinking water system,” Blankenship says. “We began working with the Air Force and entered into an agreement ... in which the Air Force provided a couple of granular activated carbon units that filters PFAS out of the groundwater.”

Those were put in place in June 2018, he says. Meantime, the city relied solely on surface water from the Fountain Valley Authority and the Southern Delivery System, which also brings water north from Pueblo Reservoir. Colorado Springs Utilities is the chief owner of the SDS pipeline, but Fountain is a member of both.

Springs Utilities has not detected forever chemicals in its water supply above the reporting limit of 2 parts per trillion, Utilities spokesperson Jennifer Jordan says.

Springs Utilities, which serves more than 200,000 customers, has not installed a membrane filtration system to remove those compounds “due to the minimal PFAS exposure potential of our source water,” she says. “We will continue to monitor our water sources for water quality constituents to ensure we meet safe drinking water standards.”

As for disposal of sludge from wastewater operations, she says that process is handled in a contained system 17 miles south of the city where the waste is not placed into a waterway or the ground.

Both Jordan and Blankenship say the saving grace for using surface waters lies in its “first use” after flowing from the mountains.

“A lot of those waters coming from the mountains [to Pueblo Reservoir] have not necessarily had the opportunity to be exposed to any notable level of PFAS,” Blankenship says, noting that the timing of SDS’ activation in April 2016 proved lucky with respect to Fountain’s unfolding need due to the presence of PFAS.

The main disadvantage of depending on surface water, he notes, was the higher cost compared with groundwater. Though he termed the cost difference “slight,” it still cost the city more.

While the Air Force installed carbon filters to enable the city of Fountain to use some well water, the long-term solution was construction of a new treatment plant funded entirely by the Air Force, which is expected to begin operations in August.

As for contaminants stripped by the carbon filters, Fountain Utilities Water Resources and Engineering Manager Taylor Murphy says the material is captured and stored until an out-of-state company comes here to retrieve it. It is later incinerated.

“We’ve heard there may be some air regulations from the EPA that may change that process,” he says.

In mid-June, Murphy says, the EPA lowered its health advisory limits on PFAS and PFOS, some of which were lowered to levels below what can be physically detected.

“It will be like trying to measure the width of a human hair with a ruler,” he says.

With regulations expected to follow that will limit the chemicals to correspondingly low levels, Blankenship says, “We have a lot of questions and a lot of uncertainties.

“There’s going to be a lot of conversation about the health advisory limit, and to the point where they propose maximum contamination levels, then we will have significant discussion,” he says, noting a rigorous public comment process is expected.

But, he says, “The biggest question is how do we meet a regulation that we can’t even test to that level for?”

Back at Venetucci Farm, managed by the Pikes Peak Community Foundation since 2006 at the behest of the late owners Nick and Bambi Venetucci, a vision to convert to organic farming was dashed by the PFAS discovery.

The farm’s wells, which had been leased to neighboring water districts, no longer were used for a time, and the farm is awaiting a permanent filtration system that will be part of the larger upgrades the districts have achieved.

A study was conducted in 2017 by students at Colorado College, the Air Force Academy, UCCS and Pikes Peak Community College that made several recommendations, including leasing the farm to flower growers. Gather Mountain Blooms, an urban flower farm that also hosts workshops through a lease of the farm, marked its first year recently with a bluegrass music festival.

It will be like trying to measure the width of a human hair with a ruler.

“We use our irrigation water to water the flowers,” Clark says. “We felt good about that because flowers aren’t a consumable product. Flowers are a growing market and business that’s developing.”

He also says the farm also serves as an educational platform for college students.

“The farm is really important. It’s still a place that grows things for our community.”

The farm also has become a laboratory of sorts, where college students study the “environmental politics of this problem,” as well as to conduct testing. UCCS incorporates the farm into its agriculture-, science- and business-based Grain School, Clark says

With help from Gather Mountain Blooms, Clark says the foundation hopes to see the farm become a venue for events, such as weddings.

The goal is to assure the farm remains part of the community, he says.

“We’re no longer able to produce and sell consumable products there,” Clark says. “It gave me, personally, this lesson that our environmental assets are vulnerable, and when you contaminate them, you contaminate them forever. There’s no putting the genie back in the bottle.”

But Clark says the farm has become an emblem of the resiliency of Fountain Valley.

“In 2017 we felt like we were shuttering more than we were building,” he says. “Yet, it’s back, it’s vibrant and it’s a place the community still gets to celebrate. All of that is the Venetucci legacy.”