Inside Out Youth Services has released an open letter to District 5 City Councilor Jill Gaebler condemning what it called transphobic comments on social media. Since President Joe Biden’s executive order, “Preventing and Combating Discrimination on the Basis of Gender Identity or Sexual Orientation,” which simply reaffirmed the interpretation of Title IX in accordance with 6-3 Supreme Court decision from June 2020, Gaebler has made a number of Twitter posts about trans people and the inclusion of trans women in sports.

The letter, signed by Danette Tritch, the volunteer facilitator of Inside Out’s TransParenting support group, and Jessie Pocock, executive director of Inside Out Youth Services, cites a specific tweet by Gaebler, “On February 15, 2021, you shared an article on Twitter with the following message: 'It’s not transphobic to believe that biological girls and women need safe spaces; whether it’s on the playing field, the locker room, a jail cell, or a domestic violence safehouse. It’s disappointing that more of us aren’t fighting for women.'”

The article in question was reposted by Graham Linehan, a UK-based television writer who in recent years has been heavily involved in harassment campaigns against trans people. His most recent stunt involved him joining a dating app for women and queer people in order to share the profiles of people he assumed were trans.

Gaebler is term-limited and will be out of office this April, but Pocock felt it was important to address her comments against trans people. "Words matter when you’re a public official, no matter where in your career you are," says Pocock. "Who knows what Jill’s future political aspirations may be? There’s lots of different offices that can be held in our county. I think it’s really, really important that she understands this what she’s saying is unacceptable. Beyond that, I think it’s always super important to me that our young people that we find it unacceptable and we are holding people accountable for their words."

Members of the trans community are also looking for a means to hold Gaebler accountable. Ash Stephens, a nonbinary weight-lifter, has suggested on Facebook that community members take their concerns to the next City Council meeting on March 9. "Right now, Jill is not going to be up for election, at least for City Council," says Stephens. "She’s term-limited out. I think it’s important, one, to just generally push back against what she’s saying, there needs to be pushback so there’s no traction on any of that. I don’t know if any of the other City Council members actually believe in what she believes and they’re just not saying anything? She could just be the loudest voice in the room, everyone else could be thinking that, and we don’t know. I think it’s important, and I’m pushing this on Facebook to say, ‘Hey, if you disagree with what she has posted you need to make your opinions known.’ I don’t know any other way to condemn her comments online and make her answer for that, because right now she hasn’t answered for it. Inside Out released their letter. I haven’t seen any response other than her reposting the article about defeating the Equality Act. It’s beyond frustrating."

You can read the complete letter from Inside Out Youth Services below: 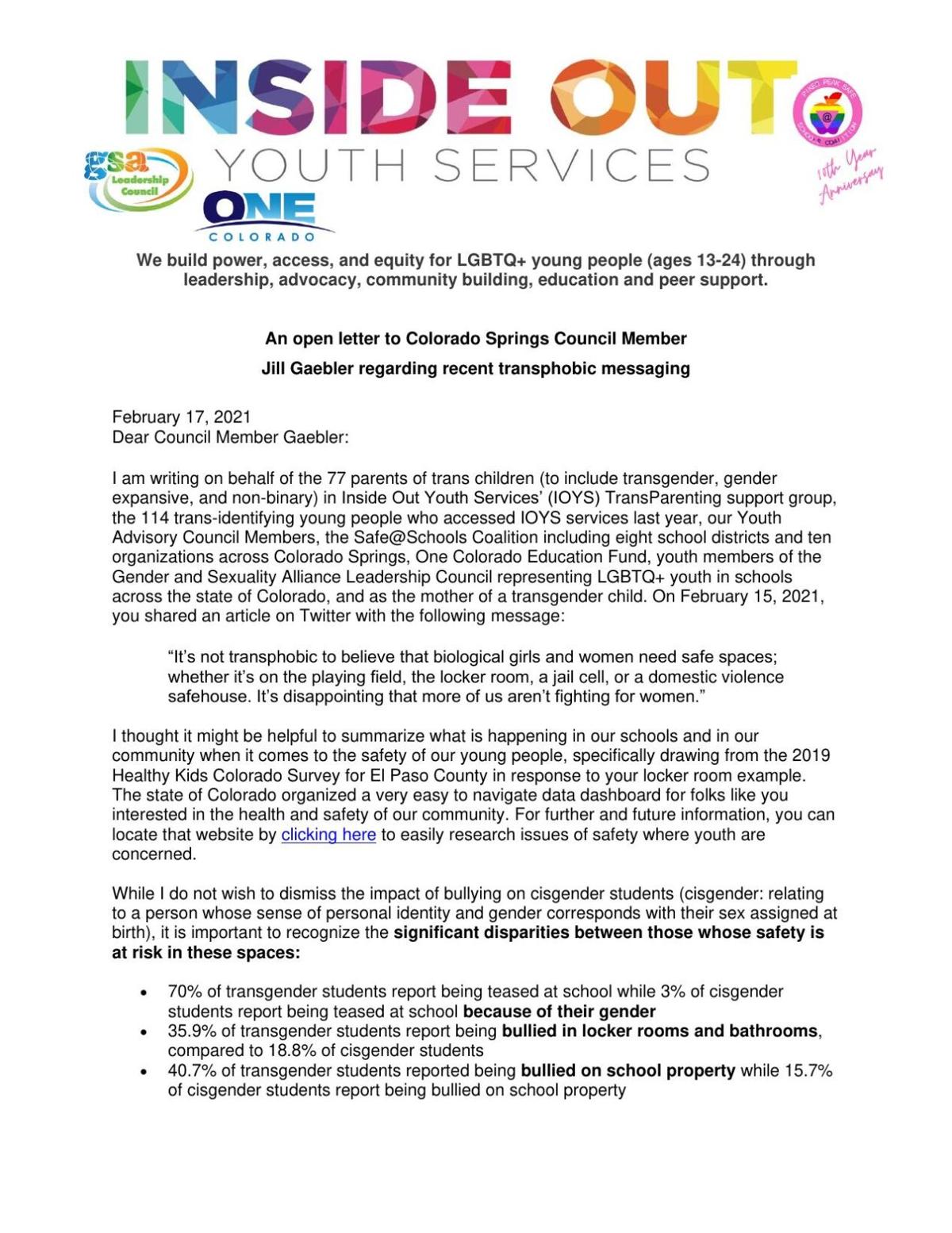 An earlier version of the story suggested that Linehan was the author of the article shared on Twitter by Gaebler. Linehan simply shared the article to his Substack.

Editor's note: This article was updated to include comment from Ash Stephens.