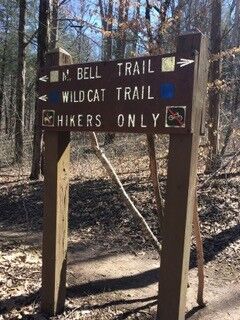 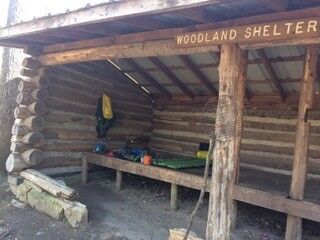 The shelter used on the stormy night

This is the story of a friend of mine and his recent attempt at a short, three-night backpacking trip in Montgomery Bell State Park in Tennessee. It's a story of how things started off well, went bad, but ended up OK due to experience, preparedness and, most importantly, staying calm. Ron used to live in the Colorado Springs area, and he and I hiked together often. I've always known him to be a smart, well prepared hiker and backpacker.

The story below is told in his own words via email correspondence, edited for clarity.

In fact, I was thinking about this last night; [in] my top-5 worst weather nights spent outdoors in, say, 40 years of outdoor hunting, camping, backpacking, etc., I have this trip rated at number two. Second worse EVER.

But let me start at the beginning.

I arrived at the park Wednesday around noon and proceeded to Wildcat Shelter. I promptly missed a trail connection and proceeded in the wrong direction for 3/4 of a mile where the trail just disappeared. Huh?

Obviously, I messed up somewhere. Me — Mr. Navigator, Mr. Map & Compass, Mr. GPS. Just shows that it can happen to anyone if you are not paying attention.

So I backtracked and found the missed turn about 20 yards from the beginning — I had added an unnecessary 1.5 miles to my trek. Oh well. Get over it, Ron.

Arrived at Wildcat Shelter after an easy hike. It is placed in a beautiful setting on a small hill over looking the intersection of two creeks. I had a pleasant stay that night, except for the mouse wars of course. His last meal was bacon.

I had six hikers pass by, only one of which stopped and chatted. It got dark at 6:30 p.m., so I just climbed in my bag and fell asleep listening to the streams.

The next morning, awoke [to] the crows at 5:30 a.m. and was on the trail at 6:30. Had a four-miler that day, but it was a beautiful morning and the trail was nice following the creek for a long way.

I stopped later at a lake to filter some water and arrived at the Woodland Shelter in 2.5 hours.

This is the scene of my second worst night outdoors.

After eating dinner at 5:30 p.m. and watching that big bright moon rise, I crawled in my bag at 6:30. It had been a crystal clear sun-shiny day. 30 minutes after dark I hear light rain beginning to patter on the metal roof. Hmm. This must be the 1/10 inch of rain that was forecasted. I’m gonna sleep good tonight listening to the rain!

At 8:30 - 9 p.m. the first thunderstorm rolled in. There’s something special about being outdoors during a t-storm, when you are in a tent or camper, or, in this case, a shelter. Lightning, heavy rain, booming thunder just sounds more real when you are "out there." But I was okay snuggled up in my sleeping bag, it was not really cold at all. More rain than I expected, but no biggie.

[The storm lasted] until around 9:30pm. The shelter faced west, [the] direction in which I could see the sky lighting up even if I could not hear thunder yet. It initially appeared that the storm was going to pass south of me. Nope.

Around 10 p.m., the wind starts picking up. Swirling around inside the shelter and blowing some of my gear around. I got out of my bag and gathered up everything, all the while listening to this approaching electrical storm. Hmm, this isn’t looking good. [It wasn't] raining at the moment, just very windy, which I knew meant this storm was going to be a big one. Wind was howling through the trees, and this was big woods. I was deep in there.

[At] 10:30 p.m. all hell broke loose. The rain came pouring down in sheets. The noise was very loud under the metal roof. Lightning began popping around me and I began to worry about a tree falling on the shelter. Then the rain REALLY started. My God!

Water was pouring off the front of the roof. It was like being behind a waterfall! I couldn’t even see out of the shelter. And the wind was blowing spray up onto my sleeping platform! I was in deep trouble at this point.

My sleeping bag [was] getting wet, which is a disaster for a goose down bag. So I came out of there, shoved it down into a garbage bag and threw it in the corner. I moved back to the rear of the shelter and sat down with my back against the wall and held my sleeping pad up in front of me to shield me from the water.

So there I am, sitting alone in the dark with a headlamp on, in the woods, in the middle of nowhere, miles from the nearest road, with little cell signal and low battery on my phone.

That’s about when the hail started.

Let me say, when a pea-sized piece of ice falls from 20,000 feet and lands on a metal roof that is about two feet above your head, it makes a loud noise, like someone was up there with a hammer banging on the metal roof. A lot of someones. Like a thousand of them. I had earplugs in my pack so I put ‘em in.

When the rain slacked off after about 30 minutes, the hail [started again]. But now I could see out the front of the shelter and the whole forest down there was flooded. It looked like a lake. And my trail was under water.

That’s when the trepidation set in. Up until that point I had not been afraid. It was some harsh conditions, but I was dealing with it. This is what I do, after all. I think I’m pretty good in adverse circumstances. I don’t panic. And though I wouldn’t say I was frightened, I was feeling worried. This was serious.

I knew the hail would not last long, and it didn’t, but seeing that flooded timber changed everything. I went in to "survival mode." This was not just another memorable night in a storm, I was alone and stranded.

Could not get a radar image on my phone, signal too weak. Battery almost gone. I had no idea if there was another round of storms behind this one.

I thought back to all the stream crossings I had made in the last 2 days. I imagined what those streams looked like now. Damn. I can’t jump streams, I’m 64 years old. I need some rocks or logs to cross on. And how deep will the water be now, after these torrential rains?

The storm outside passed but the storm inside my head was still cranking. Where was the last road I crossed? I got out my AllTrails map (that I printed, thank goodness) and saw that I had crossed the main MBSP road [a little more than a mile] before the shelter. Hiking it again in my mind, I could remember only two small creeks/ditches between me and the road. Looking at the topo map again, I could see a way that I could navigate around the flooded portion of the trail [the next day]. I had a compass with me, and knew I could do it so I began to feel a little better.

1) forget going to the next shelter, bail out now.

2) do some land navigating back to the road using the topo map and compass.

3) walk the road back to the visitor center or hitch a ride.

Now that I had a plan, my worries dissipated. I set up all my sleeping arrangements, and settled down for the night. I think I fell asleep around 3 a.m.

I awoke at 5:30 a.m. While coffee was brewing I walked down the hill to check things out. The flood was gone. GONE. Like it never happened! All that water had run off during the night! I couldn’t believe it! The sky was clear and [the] sun shining. The streams looked just like they did [the day before]. So I decided to abandon my plan. I was going to continue the loop, hike out to my car. Five miles.

I left WoodLand Shelter at 6:30 a.m. and made [it] to [the] visitors center at 9:30 a.m. It was cold, but a beautiful hike on that side of the park. If my phone wasn’t dead I would have taken more photos.

So there ya have it! Quite the experience. Grading myself, my reactions, and my decision-making, I think I did a pretty good job.

I asked Ron about what, if any lessons, were to be learned from his experience. He said that he thought he had prepared pretty well, with the exception that his external battery pack wasn't strong enough to recharge his phone more than once. That, however, wasn't really a problem since he had hard copies of any maps he would need.

As for the weather, which Ron had also planned well for in an earlier email, the forecast for his backpacking trip was for a front to move through Saturday night — he was expecting to be out of the park Saturday morning. Unfortunately, the front moved through almost 36 hours sooner than predicted.

The overarching lesson here is that no matter how well-planned, experienced or equipped you might be, anything can go wrong, especially the weather. What separates the survivor from the victim is keeping one's wits about you, and having the knowledge to deal with adversity.