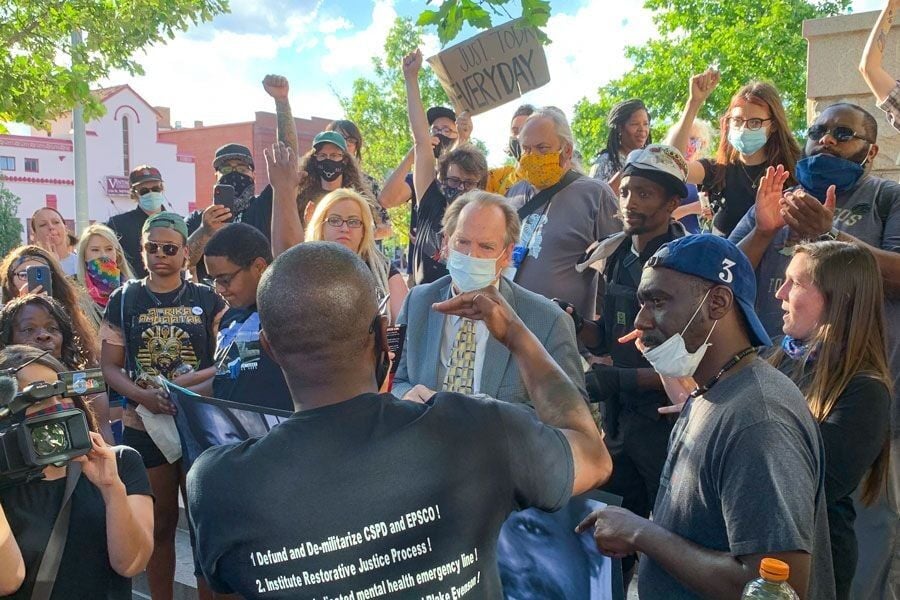 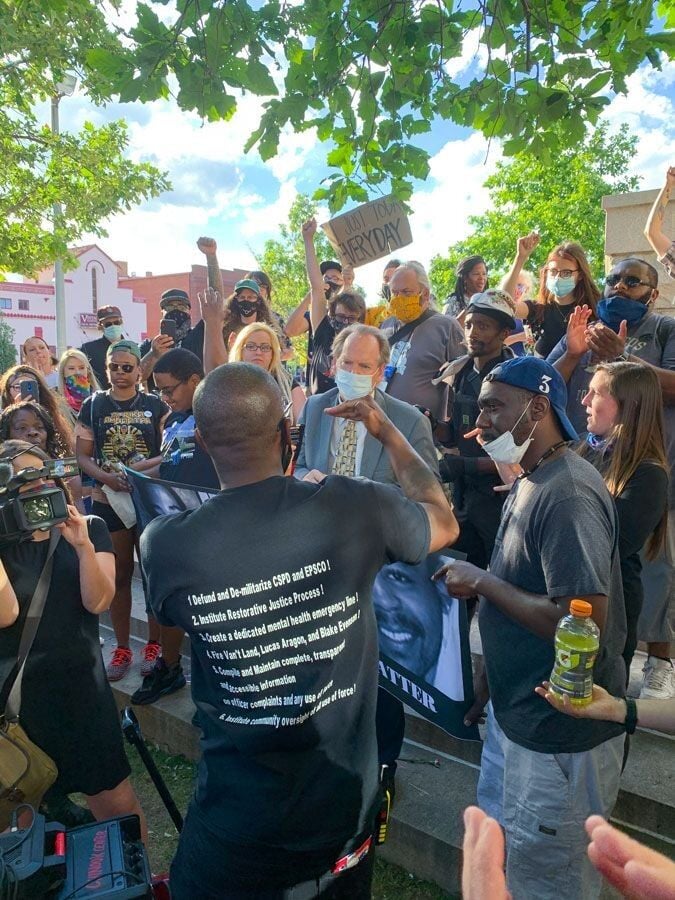 A massive, national wave of protests against police brutality has risen in the wake of George Floyd’s death at the hands of former Minneapolis police officer Derek Chauvin. Here in Colorado, those protests have spurred the passage of Senate Bill 217, the Enhance Law Enforcement Integrity Act, an unprecedented piece of legislation aimed at reforming law enforcement practices across the state. Closer to home, Colorado Springs has created a Citizen’s Accountability Advisory Board (CAAB), a body tasked with providing greater transparency and some degree of civilian oversight to the Colorado Springs Police Department.

While the decision to establish the CAAB came after weeks of tense protests and clashes with CSPD, work on a civilian oversight body had started shortly after the police shooting of De’Von Bailey on Aug. 3, 2019.

On Feb. 6, 2020, the Law Enforcement Accountability Project, organized by Pastor Promise Lee of Relevant Word Ministries and other community leaders (including Rev. Dr. Stephany Rose Spaulding of the University of Colorado at Colorado Springs, Dr. Florencia Rojo of Colorado College, Kevin Mitchell of the NAACP and Chief Vince Niski of CSPD), hosted a panel: “Transparency in Olympic City USA.” (Disclosure: The Indy co-sponsored the event).

“I worked with the group Justice for De’Von Bailey Editorial Board,” says Rojo, “the Justice for De’Von Bailey group was really interested in learning more about police accountability and transparency practices. My students did a very preliminary report looking at Colorado Springs Police Department and other police departments in Colorado, just as a starting point for understanding how different models of community oversight and data transparency look in different places.”

In March, 12 of these community leaders, referred to now as the “Austin Group,” attended a symposium in Austin, Texas, put on by the National Association for Civilian Oversight of Law Enforcement (NACOLE), with the intent of bringing back insights and best practices to present to Colorado Springs City Council.

“It was a good opportunity to learn from experts about different models of community oversight of law enforcement,” says Rojo.

Those insights would be included in two separate proposals, one presented — and rejected by Council — in April, and one presented at the same time as a proposal by the protest group The People, on June 16. The People are a coalition of local, largely young, community activists who came together in the early days of the George Floyd protests. (See cover story, June 17).

The proposal presented that day by the Austin Group, for a President’s Commission on Police Transparency and Accountability, included a seven-page list of community organizations and individuals who endorsed it. Many community members were surprised when Council voted to implement The People’s proposal instead of the Austin Group’s.

On June 23, 2020, Council passed an ordinance to create the Law Enforcement Transparency and Accountability Commission. It was approved by a vote of 8 to 1. Council member Yolanda Avila was the sole dissenter.

While both proposals had similar aims, they suggested two different kinds of committees. The President’s Commission, as proposed by the Austin Group, would have been established by the Council president, currently Richard Skorman. The CAAB, proposed by The People, was established by a majority vote of the Council.

The committee proposed by The People, essentially a citizen’s review board, has drawn criticism from experts and community members. “We heard a session [at the NACOLE symposium] that addressed new research out of a policing project at the New York School of Law,” says Jody Alyn, a diversity consultant and member of the Austin Group, “and what they said was, ‘Community advisory boards don’t work.’ So the solution that was just adopted by the City Council is something we heard very clearly: At best, they don’t work. At worst, they can make things worse than they already are.”

Mayor John Suthers supported a CAAB. “The Mayor’s office and the Colorado Springs Police Department support the formation of a formal, Council-appointed advisory committee,” he told Council, “because we believe, if done right, it can result in broader community trust in the police department.”

“This is a group that is supposed to be unified,” said Alyn at the June 11 Council meeting, where she asked Council for additional time to attempt to merge the Austin Group’s proposal with The People’s. “We were dismayed to find ourselves in such a different place.” She said “there has been an effort to commandeer the process,” and “there is a mistrust of how this has played out and so we want to be sure it is community-led, not manipulated.”

Council gave the Austin Group more time to work with The People on a joint proposal, but at the June 16 Council work session, each group presented its own. The Austin Group was primarily represented at that meeting by Spaulding.

“Some people have been invested in this community for decades,” Spaulding said, contrasting the experience of the Austin Group with the relative youth of The People. “I have said to each and every one of them [The People] to their face, ‘We welcome the passing of the torch, the lifting of the baton,’ but what will not happen is a dismantling of the work by people that have been doing this and investing their own time, money and energy more than three weeks. ...

“You have our request for a President’s Commission on police transparency and accountability,” Spaulding continued, “and I have already laid it out for why it must be this way, because there is no trust. Moreover, there is no power when you have to respond to and be under the guidance of the people that are oppressing you. This work reflects broad coalition and unified building and if you have the audacity to tell over 30 invested organizations in this community that they are not the voice of this community, then the wrath and the consequences rest on you.”

In response to an interview request from the Indy, Spaulding referred questions to Alyn.

While Spaulding sought to establish the credibility of the Austin Group’s proposal through the work and broad support of community members, Alyn questioned the authenticity of The People’s proposal. “Their proposal is polished,” she said, “None of them have known each other longer than three weeks, from what I understand.”

Alyn suggested that The People and their proposal were aided by one or more outside influencers. “Their leader, Daniel Campana, and I had a conversation for an hour and a half,” she said before the Council. “He moved to town three months ago. He involved a lobbyist to prepare the proposals that have been submitted to you on behalf of that group.”

“All of it is false,” says Campana, a 34 year-old architectural photographer from Sarasota, Florida. “I run a creative agency. We do branding and software development.” Campana does have some experience in political organizing; 10 years ago he ran a city commissioner campaign in Florida. “I had a background in marketing, so I got involved in running a campaign,” he says.

Campana says his involvement in Colorado Springs politics is similarly incidental. “I believe Black lives matter, so I went to the protests and that’s how I got involved,” he says. “I started meeting some of the young leaders and I had the privilege of putting on my city hat again and I said ‘Hey, have you talked to City Council members? Have you done this?’ and then was part of the conversations. But the proposal? They wrote that. The work? They did that. This is their movement and their moment.”

Campana says that the lobbyist Alyn says prepared The People’s proposal is actually Ted Brassfield, a 40-year-old Colorado Springs School alum who came back to Colorado Springs to spend time with his father during the pandemic. “One of my first political activities was debating Will Perkins on the merits of Amendment 2 [a 1992 constitutional amendment that banned laws protecting gay and bisexual people from discrimination] in my civics class,” recalls Brassfield. “I left for college and haven’t been back for 20 years, except to visit family. COVID hit, so I came out here to ride it out instead of staying in my one-bedroom apartment in Santa Monica.

“I primarily do tech and telecom policy,” explains Brassfield. “I did work on Capitol Hill years and years ago. I have not ever been a registered lobbyist. I have worked for trade associations, and I have been involved in every campaign cycle in some fashion, whether it’s helping run a mayoral race in Pittsburgh or doing election protection for Obama in ’08 for all of southern Indiana, because I’m passionate and I care about progressive politics.”

Like Campana, Brassfield says he was impressed by the commitment and intensity of the young protesters, and volunteered his skills and experience. “I introduced myself and told them I was really impressed with what they were doing and that I have written legislation before,” he says. “They had already been doing the meetings [with Council] and had already been doing the work. They knew what they wanted.

“I had gone through the city charter to get a sense of what the limits of power were for the City Council. I helped put what they were saying into policy language. Neither Daniel [Campana] nor I have ever been paid.”

On June 23, when the vote was taken in favor of The People’s proposal, Avila expressed her concerns over the CAAB, noting it did not go far enough. “The shooting of De’Von Bailey happened in my district. The shooting of Joshua Vigil happened in my district,” she said. “What we’re doing now is lukewarm. It is not addressing what the people are asking for out there, and so I am not going to support this until we get something strong. As it stands right now, no. Because this is not giving voice to the community. It is the status quo, and that is what is wanted by this [mayoral] administration, and it is not wanted by the people and the community.”

“Community advisory boards are what we got under the city charter,” says Alyn, “answering to the strong Mayor. The problem with them is that it’s often the police policing themselves, and it means they can put obstacles in the way in terms of getting data that are needed, they can restrict membership, they can influence everything about it, and it’s essentially under the police.”

Many community members, including the Indy’s editorial board, have commented on the new commission’s “lack of teeth,” noting that it won’t have the authority to take action against officers who are accused of misconduct. However, due to the Colorado Springs City Charter, no entity created by Council would have had that kind of power anyway. Even a President’s Commission.

In the end, for such an entity to have that kind of power and independence, it would have to come from the mayor or it would require changes to the city charter granting Council the authority to provide oversight of the police department.

“They [The People] developed the best piece of policy that Colorado Springs could pass under a strong mayor system,” says Brassfield. “At the end of the day, the mayor has all the power.”