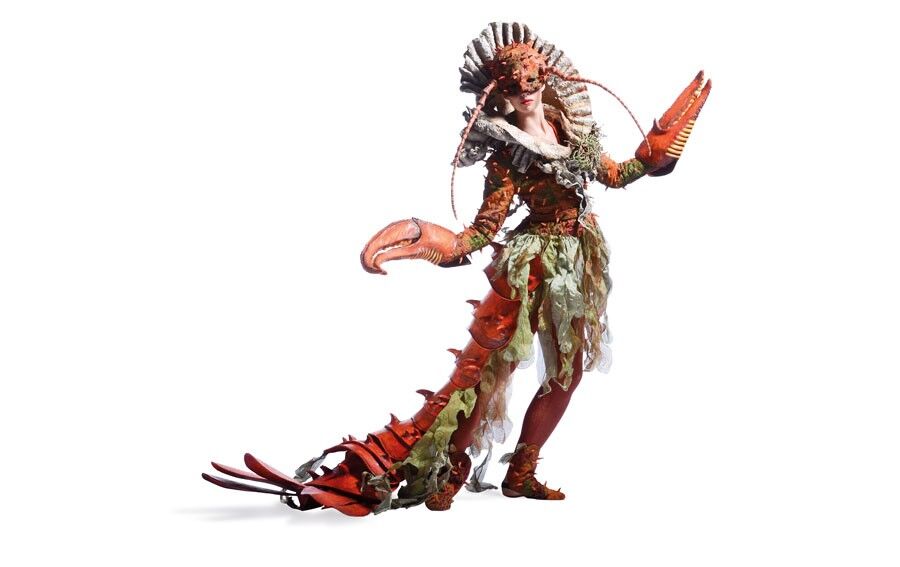 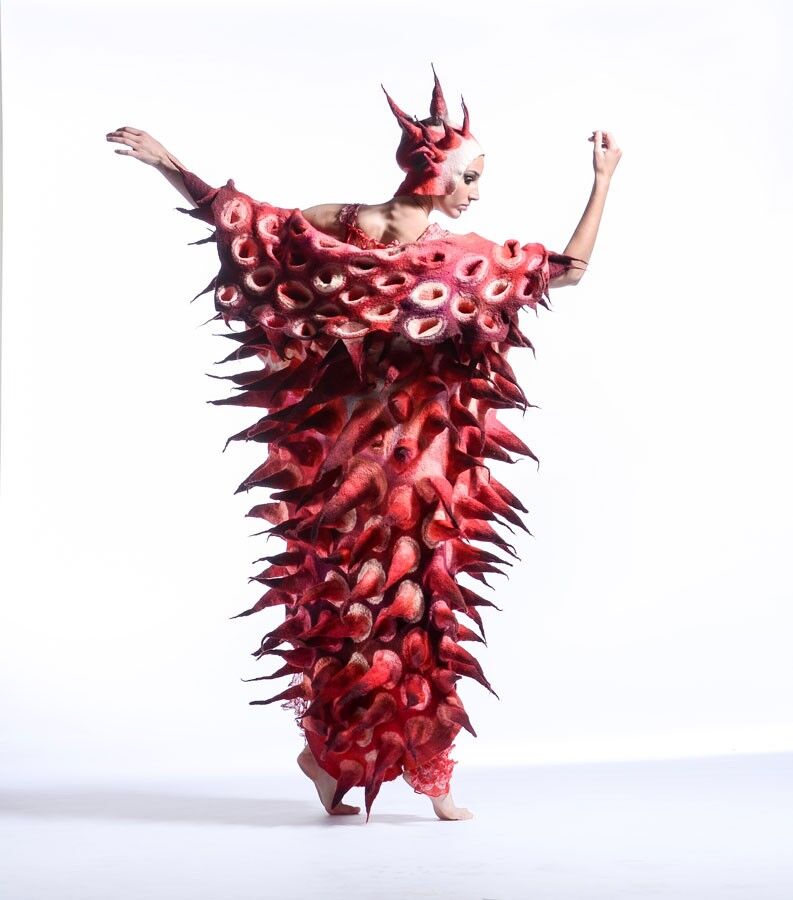 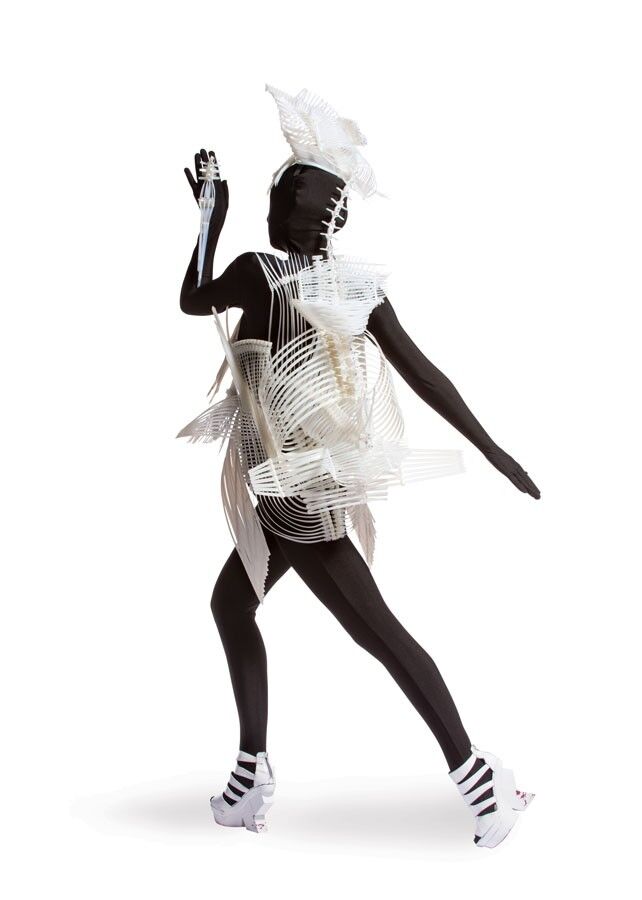 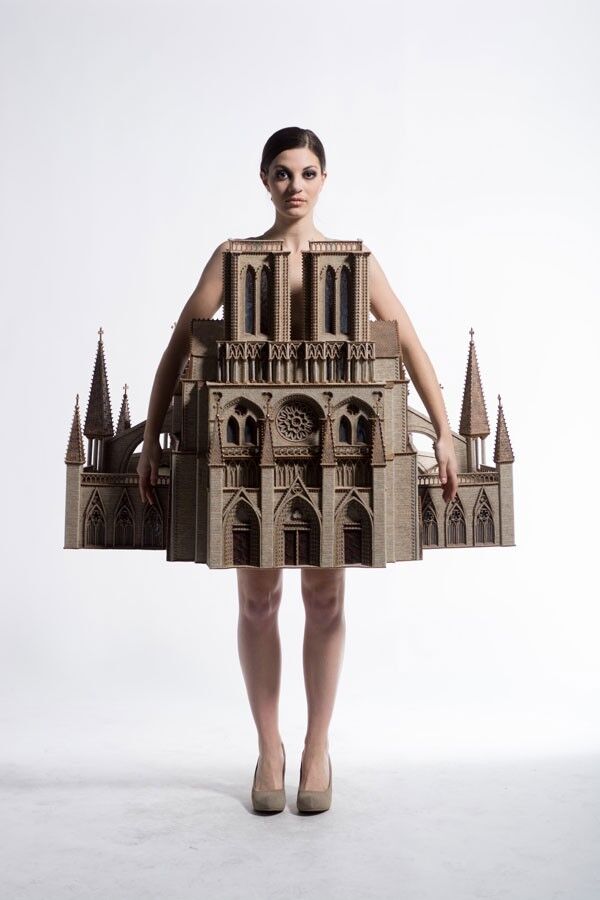 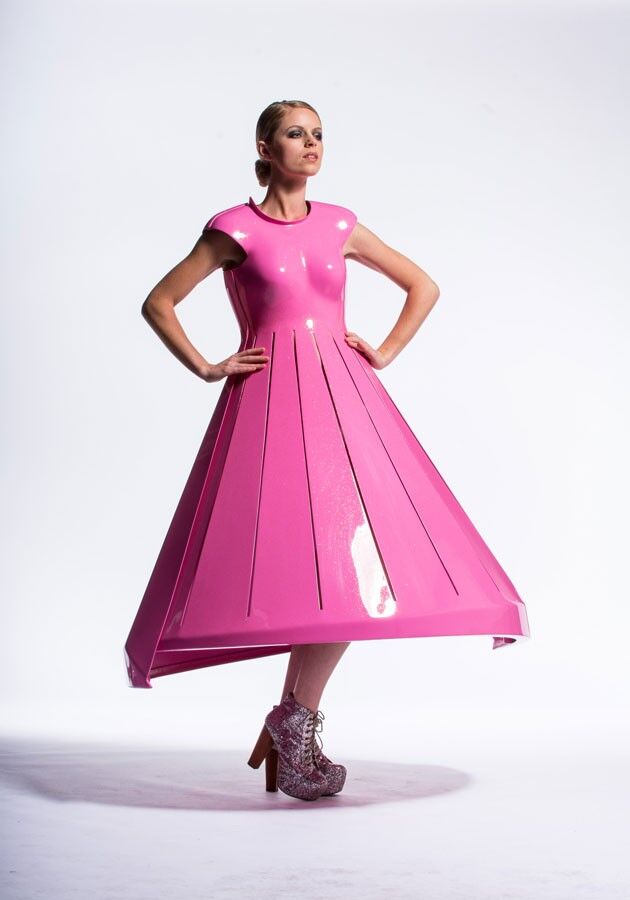 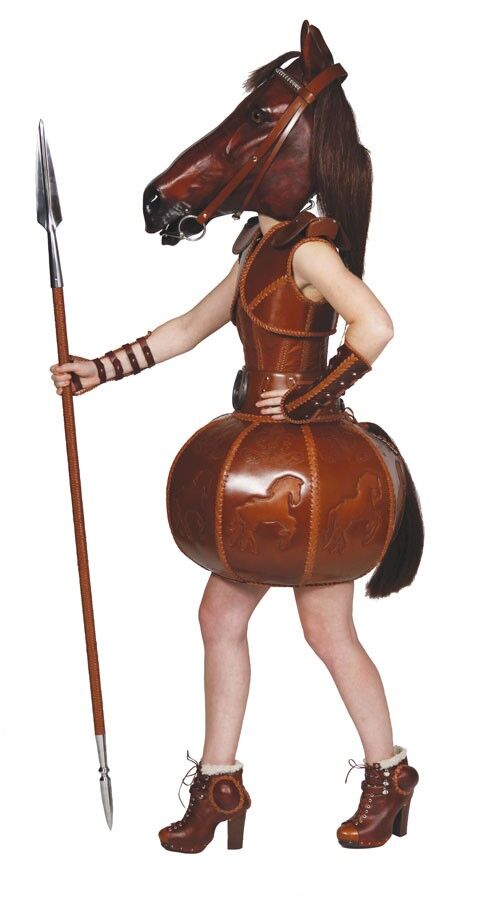 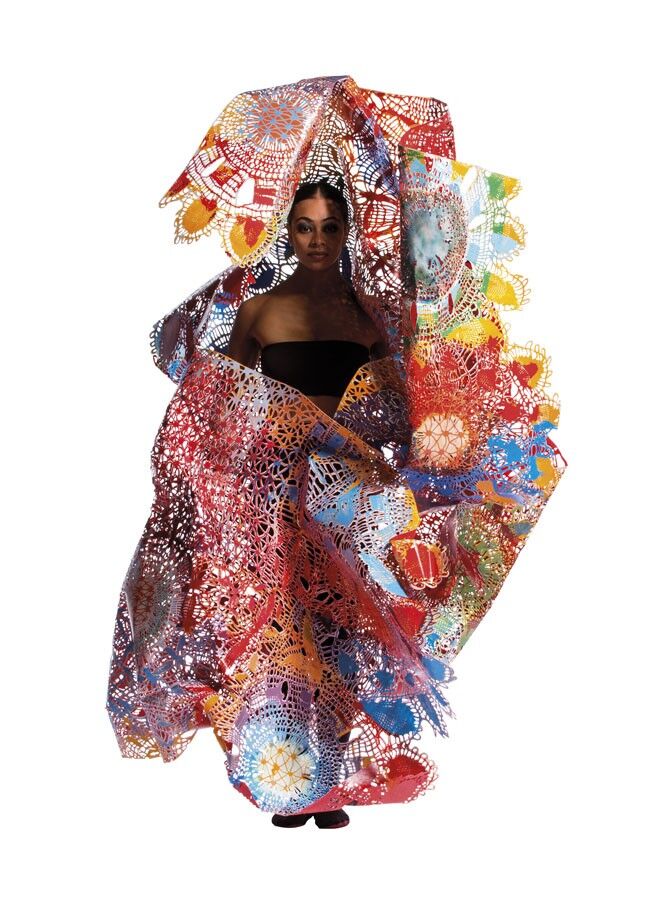 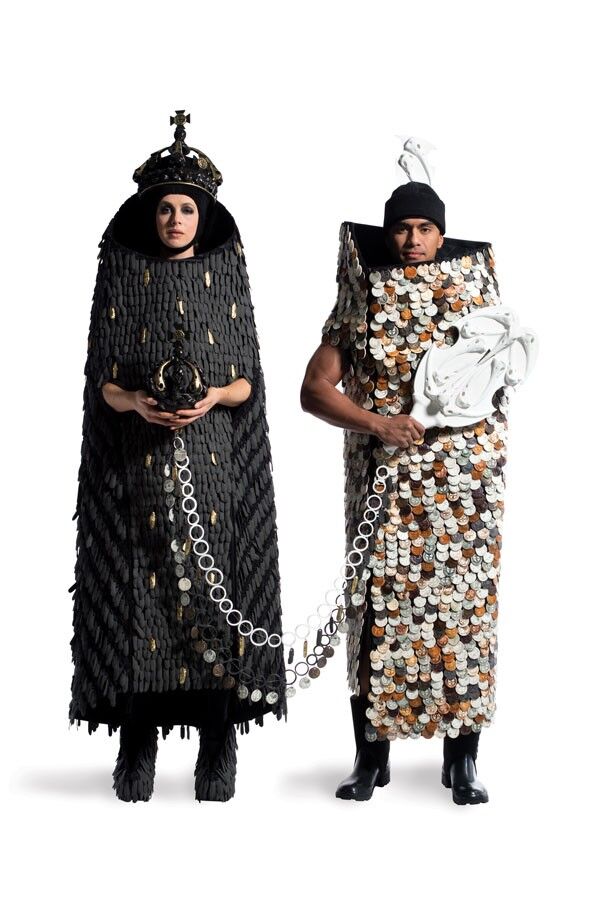 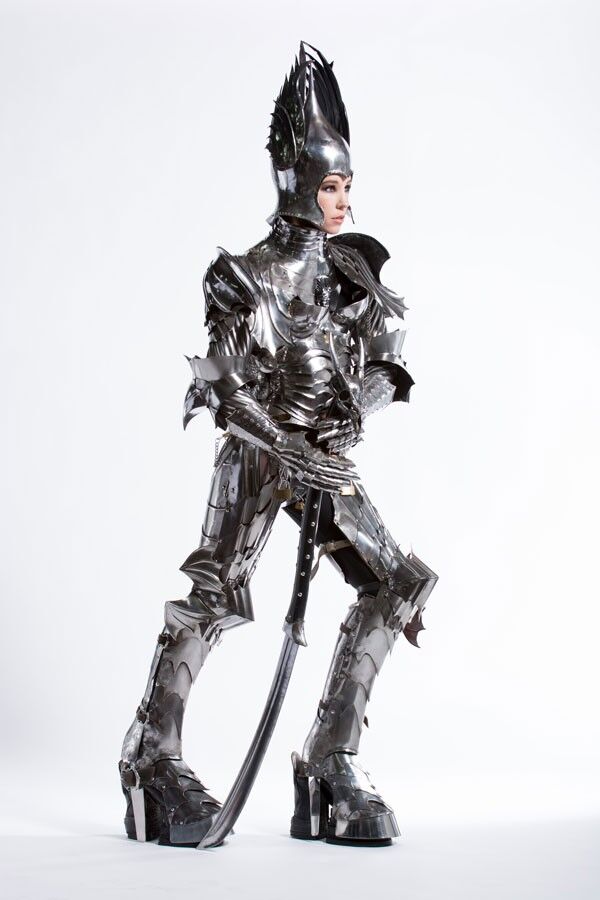 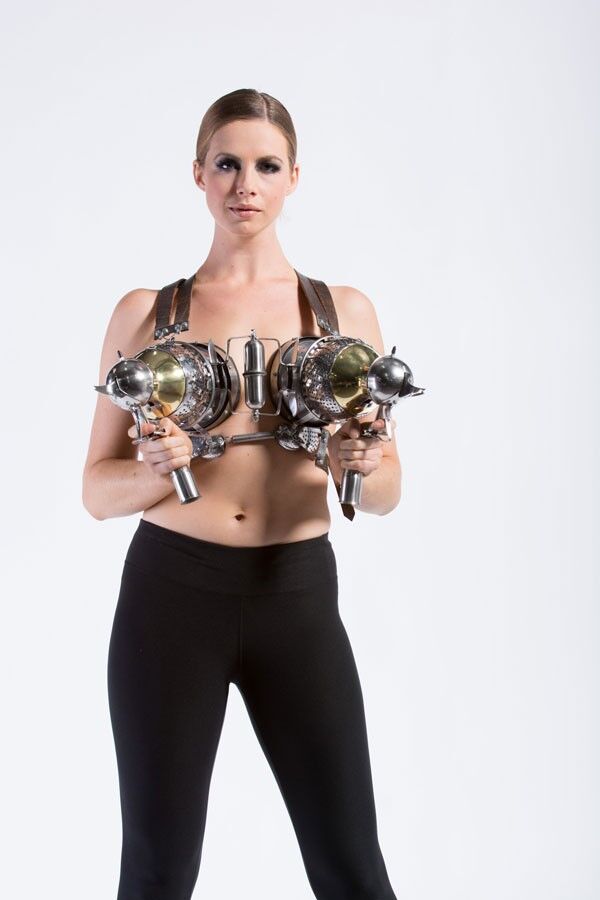 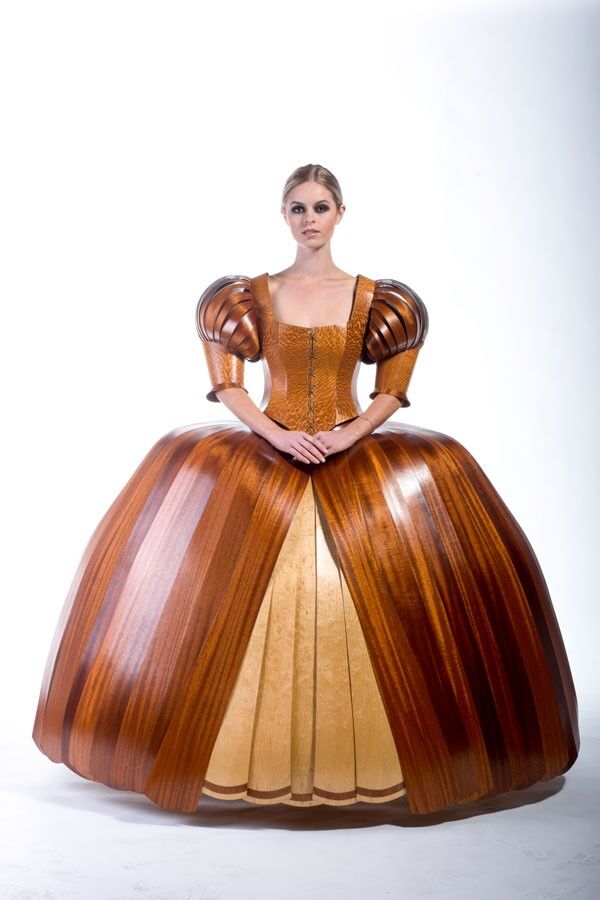 Something unique will soon be sashaying into the Colorado Springs Fine Arts Center at Colorado College — an eccentric blend of fashion, engineering, visual art, storytelling and theater that represents a decades-long legacy from New Zealand.

The World of WearableArt™ (WOW®) could be described in many ways: an awards show, an art show, a contest and, in this case, a touring art exhibition showcasing some of the most imaginative entries from the program’s 31-year history. Each year, WOW® calls for international designers to create wearable pieces of artwork to be displayed in its show, which is both a theatrical performance and a showcase of the ingenuity of each juried garment.

“The first show in 1987 was held at the William Higgins Gallery, a restored historic cottage in rural Nelson, New Zealand,” says competition director Heather Palmer. “It was to be held on the veranda and in the gardens, but that day we had one of the worst rainstorms in years. We had to hurriedly erect a [marquee] and attach it to the gallery using tarpaulins borrowed from local farmers. We hung a few coloured lights, played the music on a borrowed stereo, and wowed a curious audience of around 200 people who braved the weather.”

But the award show doesn’t only benefit its audience. The designers find a lot of value in participating. In addition to offering prizes worth more than $187,000 NZD, WOW® offers two residency awards — one with conceptual design and physical effects manufacturing facility Weta Workshop, and another with Cirque du Soleil.

The touring exhibit, opening at the Fine Arts Center on June 22, includes 32 award-winning garments made with everything from wood to plastic to taxidermic hedgehogs. Each piece represents its designer’s own inspirations, but many were entered specifically to meet a theme. WOW® calls these themes “sections,” three of which remain consistent each year (Aotearoa, which speaks to New Zealand’s “sense of place”; Open, which has no rules or boundaries; and Avant-garde, a category for experimental pieces). The other three sections are chosen by WOW® founder Dame Suzie Moncrieff and Heather Palmer for each competition. The 2019 sections are “Mythology,” “Transform” and “White.”

Though the touring show includes section-winning and runner-up garments from as far back as 1998, many could be competitors in these special sections today. Take “Persephone’s Descent” (p. 22), a suit of armor created by Stuart Johnson of New Zealand, inspired by the Greek myth of Persephone and Hades. Or “Born to Die” (p. 19), a piece by Guo Xiao Tong from China, made entirely of white cable ties.

These selections and the others in the exhibition represent the best of the best, a perfect snapshot of WOW® variety in design, materials and even the designers’ backgrounds.

“The Competition is open to anyone, you don’t have to have a traditional creative background,” says Palmer. “We have created a platform where established designers who have designed for the likes of Katy Perry, Mariah Carey and Nicki Minaj, sit alongside first-time entrants who do not have a traditional creative background but have an extraordinary idea and have the ability to execute it beautifully.”

Viewers of the touring exhibition at the FAC will be able to enjoy all manner of WOW® excellence, regardless of whether they can attend the prestigious event in New Zealand in the fall. But the garments won’t be the only draw.

The exhibition includes screening footage from previous World of WearableArt™ shows, plus a “workroom.” This interactive station will offer FAC visitors opportunities to try creating their own wearable works as they delve into the storied history of WOW®.

“The International Touring Exhibition allows people to get up close and appreciate the detail and craftsmanship that goes into creating a wearable art garment,” Palmer says. “The imagination of World of WearableArt™ designers from the past 30 years is brought together in this collection; a special opportunity to be inspired and awed by creative minds from all over the world.”

We chose some of our favorite pieces from the exhibition to share, but to get the full effect, drop by the FAC between June 22 and Sept. 22.

Though “Gothic Habit” may look like a landmark right out of Paris, France, designer Lynn Christiansen is actually an American with a strong affinity for the architecture of Gothic cathedrals. “Gothic Habit” is Christiansen’s ninth entry in the World of WearableArt™, which she has entered nearly every year since she discovered the competition in 2007. This particular piece won the Open Section, and was runner-up for the Supreme Award in 2014. It is made entirely of felt and wood. According to WOW®, the garment includes more than 2,300 individually cut pieces of felt, each laser-etched to resemble brick. “The burning of the felt became part of the brick texture and the more the felt is touched and worn the more it looks like aged brick,” said Christiansen in 2014.

As visceral as “Skin” appears at first glance, its roots are oddly domestic. Designer Marjolein Dallinga had long been a painter, but discovered a fascination with felt when she had children and began making crafts with them. Starting without a blueprint or design, Dallinga allows each piece she creates to grow from a concept as she works. “I see ‘skin’ as a partner,” she says. “It has something to do with protection. You go out together, you keep each other warm, you are seen together, you go home together and free yourself from the embrace, and then go your separate ways.” This piece, her first entry into WOW®, was made with wool felt and silk, the latter of which she dyed using the Japanese method of shibori, a technique similar to tie-dye. In 2011, “Skin” was the runner-up in the First-time Entrant Section, and a commended garment in the Microscope Section.

This garment made entirely of cable ties was a runner-up in the Creative Excellence Section in 2013. Its designer, Guo Xiao Tong, was also featured in the WOW® 2018 Awards Show, where she won the Weta Workshop Emerging Designer Award for her garment “Spirit Bone.”

One might not guess, looking at designer Peter Wakeman’s work, that he is entirely self-taught. However, Wakeman makes a living as a commercial cleaner, and created “Chica Under Glass” — made of 96 percent fiberglass and 4 percent plywood — in his garage. This was his first entry into the WOW® Awards Show, and it took home first place in the Avant-garde Section in 2013, finishing as a runner-up for the Supreme Award. But Wakeman wouldn’t come in second place forever; his 2015 entry “Venice In Glass Bind” won the Supreme Award that year.

[image-6] In Greek mythology, Hylonome was a centaur whose lover was killed in the battle against the Lapiths; she took her own life in grief for his loss. Designer Mary Wing To pays homage to this story with “Hylonome,” whose construction draws on traditions of British saddlery. As a professional leather artisan, Wing To was uniquely prepared to tackle such an ambitious piece. She trained under the queen’s master saddler and has a master’s degree in fashion design and technology. All elements of her training come into play in “Hylonome,” which won both the Avant-garde Section and the Supreme Award in 2011. “Each leather piece is hand-cut, edged, stained, stenciled, stitch-marked, molded, sculpted, hand-stitched and finally hand-laced together to resurrect the spirit of the most heart bound and beautiful female centaur in mythology,” Wing To says.

Made of fabric, papier-mâché and wire, “Hermecea” took two years for artist Jan Kerr to bring to life. She was inspired by the crustaceans in New Zealand’s waters, specifically hermit crabs and lobsters, and materials compiled by WOW® say, “Jan has had a long fascination with Hermit Crabs, these shy vulnerable creatures moving from Shell Home to Shell Home, and saw a parallel to her and her life.” Perhaps most impressive about this unique piece is its tail. The design not only mimics the look of a lobster’s tail, but the movement as well. “Hermecea” won the Open Section and the Weta Award in 2011.

[image-7] Inspired by a crumpled piece of antique lace, this marvel made of aluminum won the Open Section in 2013. Uncle-and-niece duo Jeff Thomson, a sculptor, and Fenella Fenton, an industrial designer, combined their impressive skills for their first joint entry.

[image-9] If the intricate armor of “Persephone’s Descent” looks like it belongs on a mythological warrior in Lord of the Rings, it may be because designer Stuart Johnson actually worked on the Lord of the Rings trilogy, creating weapons for the films at Weta Workshop. But the skills he applied to his first WOW® entry come not only from his experience at Weta, but from a long history as a blacksmith, armorer and jeweler. Inspired by the Greek myth of Persephone, who was abducted by Hades and taken to the underworld, “Persephone’s Descent” was “made with mild and stainless steel which was cut and fluted using ancient blacksmithing and armour techniques such as a tree stump and ball-peen hammer,” according to Johnson. This incredible design won the Reflective Section and the Supreme Award in 2002.

[image-8] Sisters Tatyanna and Natasha Meharry drew inspiration for their 2013 garment “The Exchange” from a pivotal piece of New Zealand history: The Treaty of Waitangi. This treaty, signed in 1840 by British representatives and nearly 550 Ma¯ori chiefs, ceded sovereignty over New Zealand to the British. Due to discrepancies in the text’s translation, many Maori did not know exactly what they were signing away, and the conflicts that arose led to the New Zealand Wars. The two figures in “The Exchange” represent the two sides of the treaty, bedecked in their respective signs of wealth and bound together by a chain attached to a crown in the European woman’s hands. “We wanted it to be symbolic as opposed to confrontational,” Tatyanna said in 2013. “I think that’s one thing about our history. We’re entering a new era where things aren’t so confrontational, there is blending of the culture and this unique thing we have in New Zealand where we want to make right.” In 2013, “The Exchange” won the Supreme Award and the South Pacific Section. In 2018, the sisters became the first designers in WOW® history to have won the Supreme Award twice, this time taking home the prize with their World War II-inspired piece “WAR sTOrY.”

[image-10] Alongside the full-body garments that have been part of the World of WearableArt™ Award Show over the decades, one special section has enabled designers to play in a rather unique way. The Bizarre Bra Section includes materials seldom seen in fashion — working handcuffs and stuffed animals being but two examples from the touring exhibition. Designers have taken their inspiration from all kinds of sources; “Prickly Heat” pays homage to designer Wendy Moyer’s home in Mexico, “Budgerigar Brassiere” honors designer Emily Valentine Bullock’s deceased pet budgies, “Busted” by Rodney Thorburn is meant to utilize materials entirely antithetical to traditional lingerie, “Hands Off” by Mark Crocker (pictured) takes inspiration from sci-fi and art nouveau, and “Epicentre Divas” celebrates hedgehogs that survived an earthquake only to be struck down by passing cars. We recommend Googling some more Bizarre Bras after you’ve taken a look at those on display at the FAC. The 2018 section winner, a bra made to look like twin jet engines, is a particular marvel.

[image-11] A carpenter by trade, designer David Walker likely never imagined that his first entry into the World of WearableArt™ in 2009 would win him not only the Open Section Award, but the show’s Supreme Award as well. This masterpiece constructed from mahogany, lacewood, maple and cedar “was inspired by a gift,” according to Walker, “a pile of wood veneer from which the first draft was made. The goal was to see how a garment made only of wood could replicate a 17th century ballgown.”